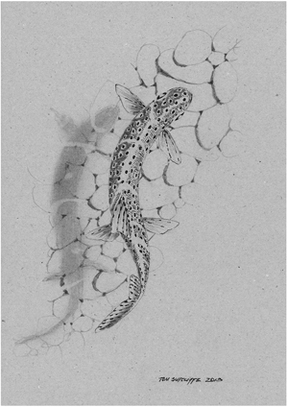 All that was holding me back from tying a Kite's Imperial dry fly to spec, something I've been meaning to do for ages, was getting hold of heron herl for the body. Then out of the blue, Eben Dowd, a friend from the Eastern Cape, kindly sent me a batch of heron feathers and that seemed like an omen so I got on with it.

Kite mentions in his book, A Fisherman's Diary (page 113), that the pattern was designed not as I had always believed to imitate that prince of mayflies, the opulent Ephemera danica, but to imitate the large Olive of spring, Ephemera rhodani. 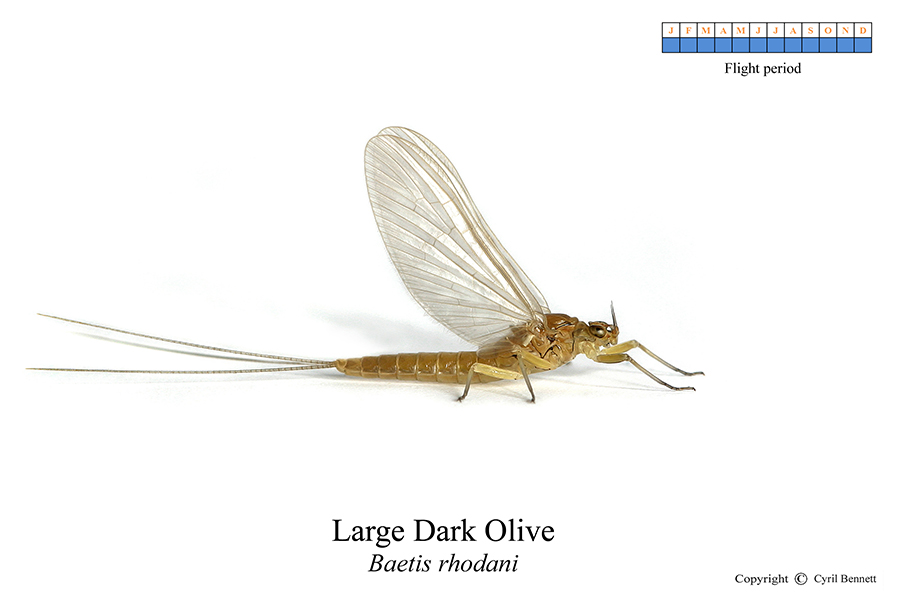 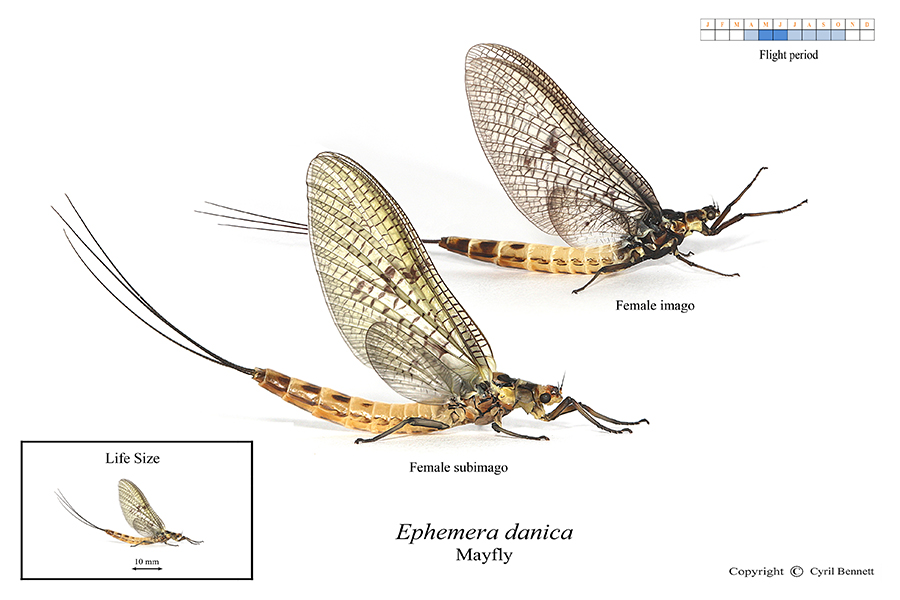 These images, the finest pictures of mayflies I have ever seen, are per kind favour of Dr Cyril Bennett, a world renowned aquatic entomologist very involved in river monitoring and restoration in the UK, for which he was recently awarded an MBE. (Examples of his outstanding insect photographs are featured in The Pocket Guide to Matching the Hatch , which he co-authored with the late Peter Lapsley in 2010.) 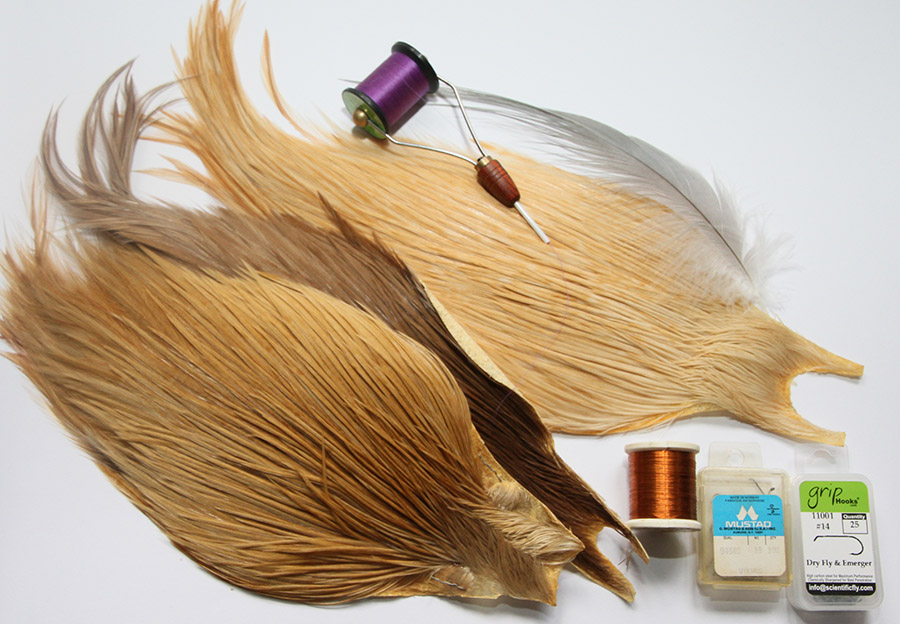 From left to right:

Honey dun, medium dun (for purposes of comparison) and pale ginger capes. Alongside the ginger cape is the heron herl, purple silk and, below, fine wire (unfortunately copper not gold), Mustad 94848 and Grip 11001 dry fly hooks .

Reading Kite's diary, you get the impression the Imperial was about all he used by way of dry flies for most of the chalkstream season, but that impression is wrong. In his book Nymph Fishing in Practise, he gives an interesting table of the patterns used to catch the 951 trout he took in his 1962 season. In summary it reads as follows:

It's interesting to note that the large Olive of spring – Ephemera rhodani – hatches year round accounting, I believe, in great part for the success of the Kite's Imperial, whereas  hatches of Ephemera danica are mainly concentrated in May and June.

The nearest I could get to the sort of hook Kite might have used was the Mustad 94840, although it may have been the 94842, the same hook, but with an upturned eye. On matters of detail Kite says the whisks should be greyish-brown in spring and honey-dun, or nearest, later. The thorax is doubled and redoubled in the Netheravon-style, a technique Frank Sawyer developed in creating his PTN.

It's interesting that many images I have seen of Kite's Imperial don't show any thorax at all and initially I thought the thorax might be in a conventional position with the hackle tied over it. But Davy McPhail in his short video clip on tying the Kite's Imperial, has the thorax behind the hackle, as does David Collyer in his book, Fly Dressing II. Collyer illustrates and describes the tying of the pattern very well. And again, the thorax is behind the hackle. 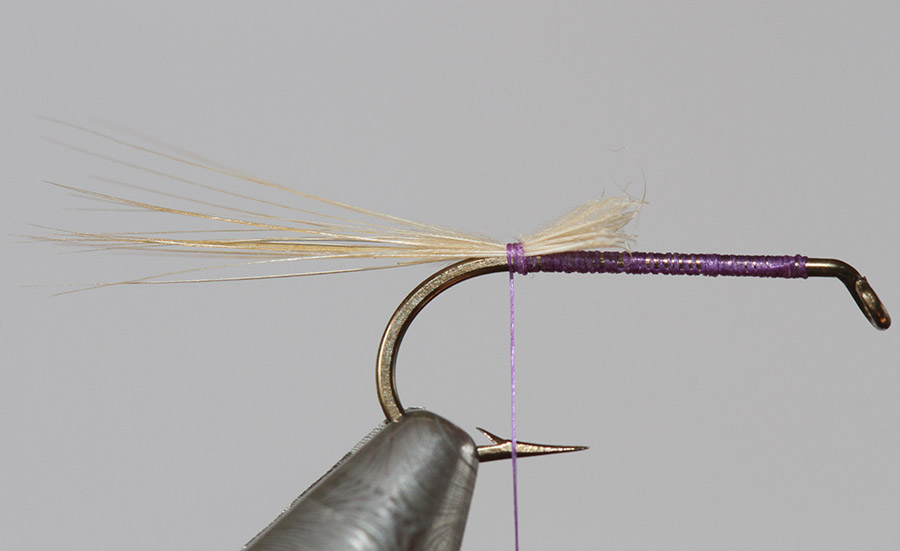 Dress the shank with thread. Add in the tail whisks and if you prefer, under-wrap them. This is not something you will see in the Catskill school of fly tying, but it helps to flare the fibres. All you do is follow the last wrap of silk around the tail fibres with one wrap under them then wrap again and pull hard. Thanks to Davie McPhail for this tip. 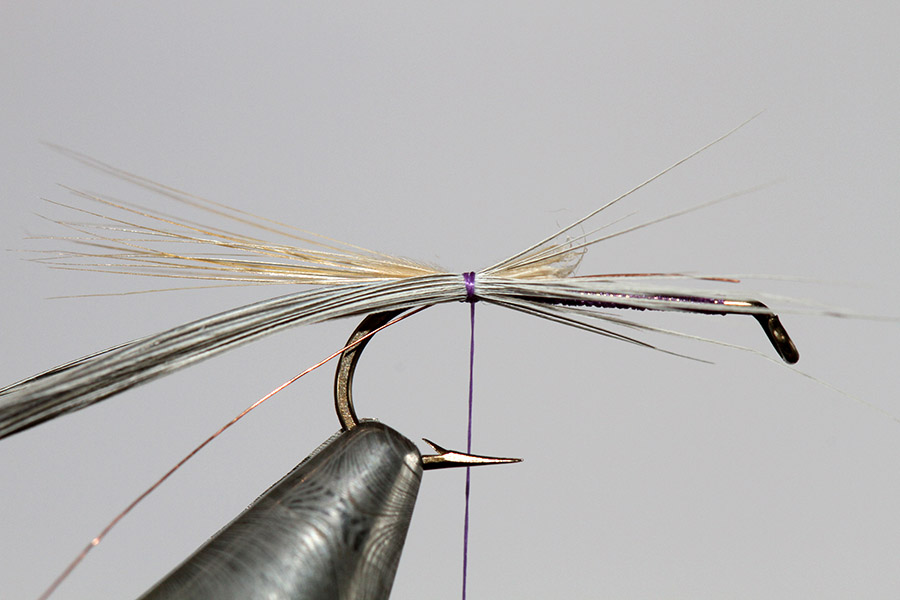 Add the wire and four or five strands of heron herl. 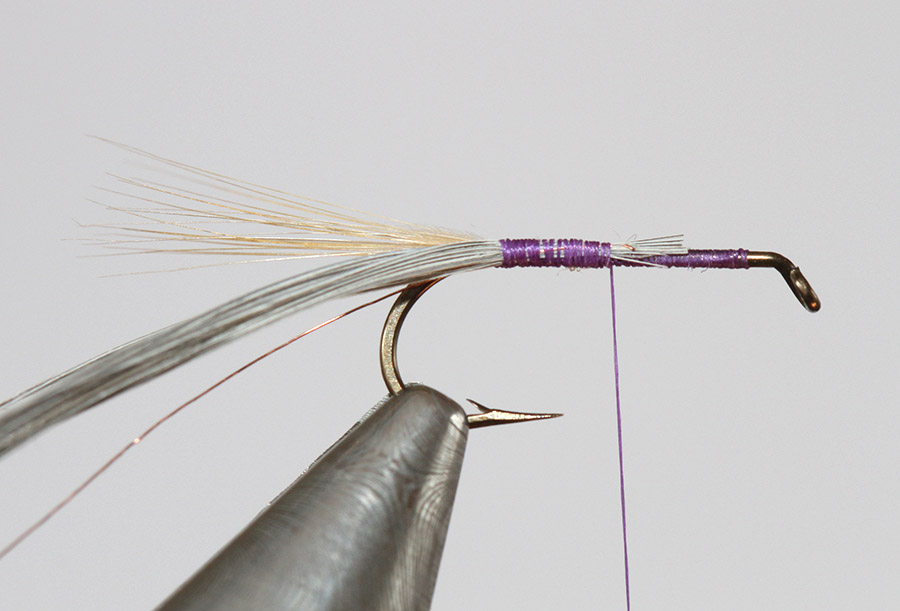 Wrap the heron herl fibres halfway up the shank and anchor them with thread. 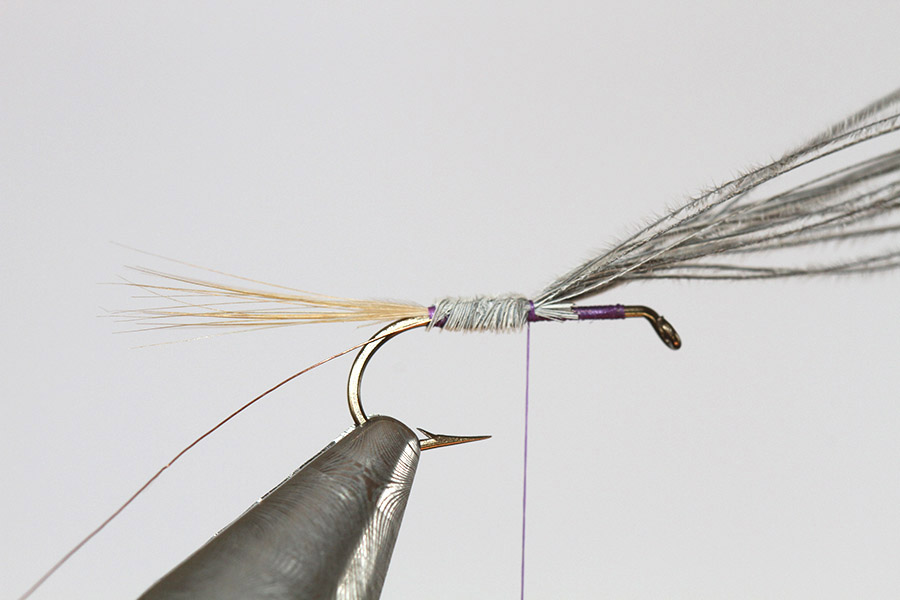 Wind three turns of wire up the abdomen in the opposite direction you wound the heron herl and trap it. 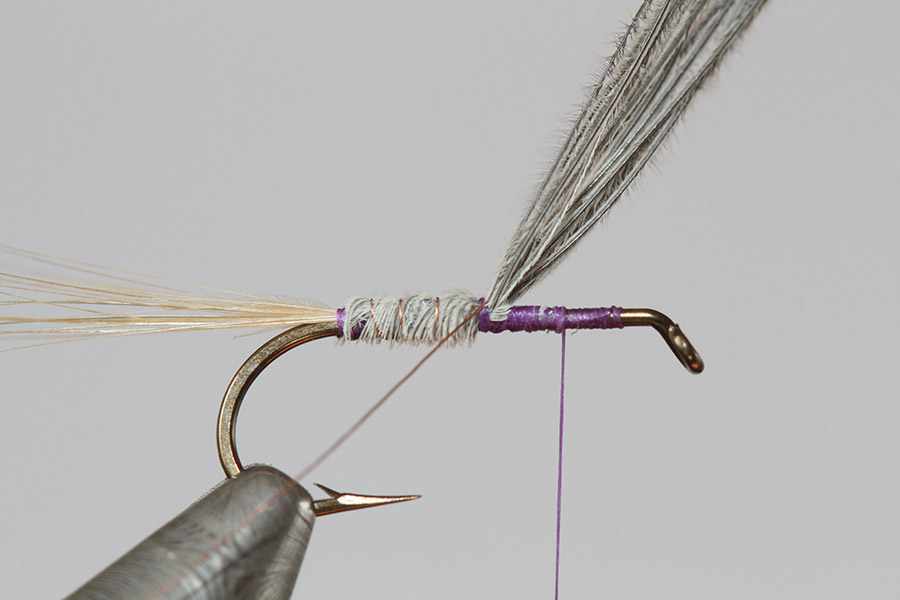 Move the thread to the point on the hook shank where the thorax will end and then wrap again with heron herl to this point, leaving enough space to put in the hackle. 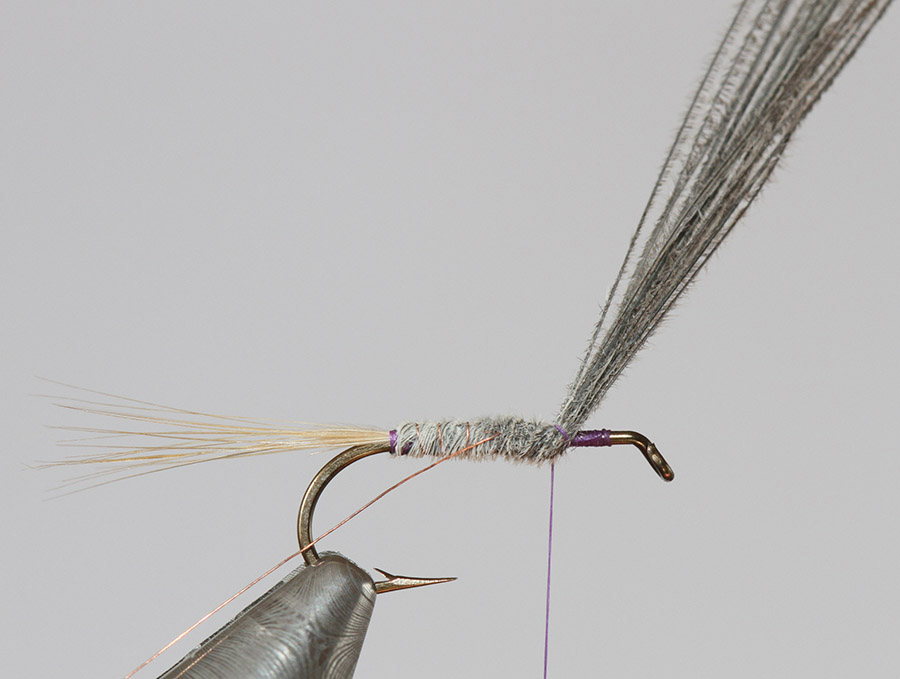 Now bend the herl back over the thorax, trap it with wire and wind the wire forward over the under-thorax. 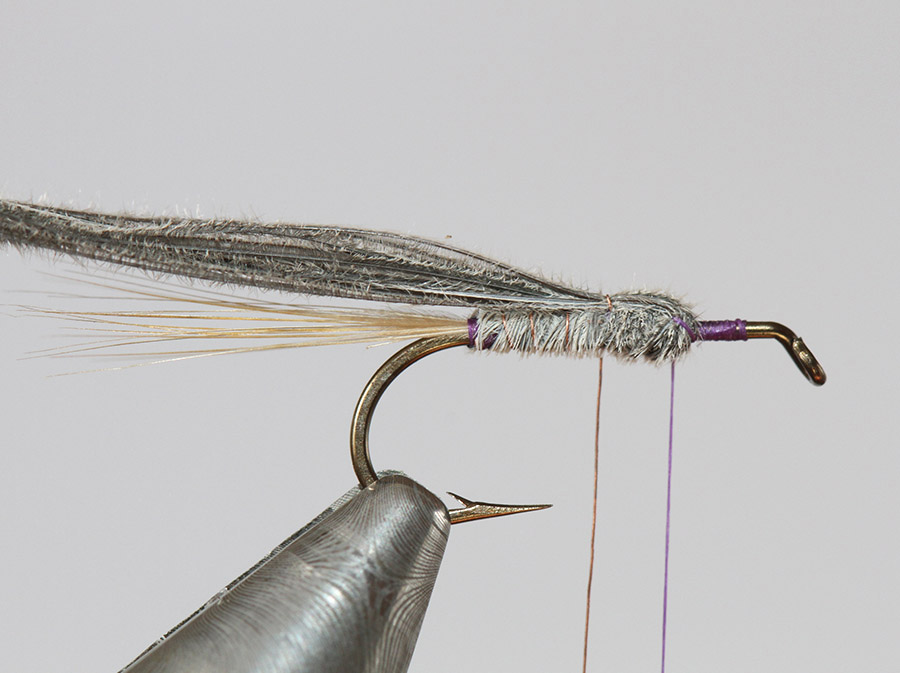 Bend the herl forward again over the thorax, trap it and snip off the remnants. 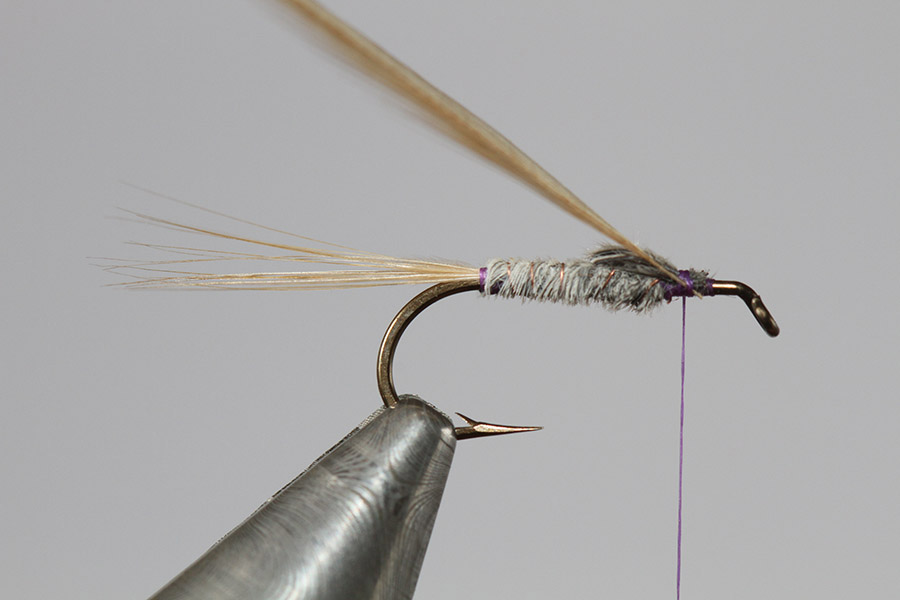 Tie in the hackle, wind it forward leaving space for a head, whip finish and you're done. 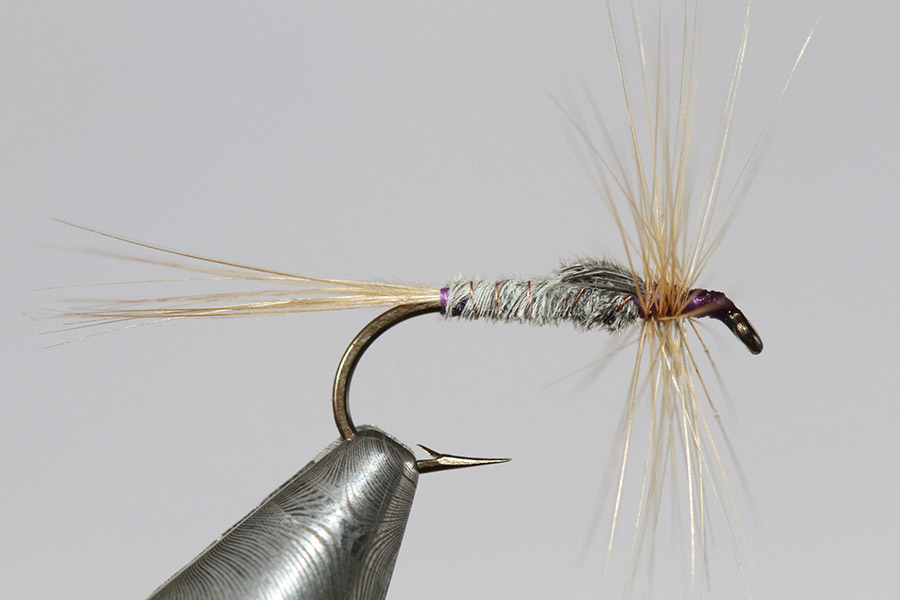 The fly below was tied to what I think is actually the original pattern's specification. It's tied on a size 14 Grip hook (model 11001) and this time I've dressed the fly with pale ginger whisks and hackle. 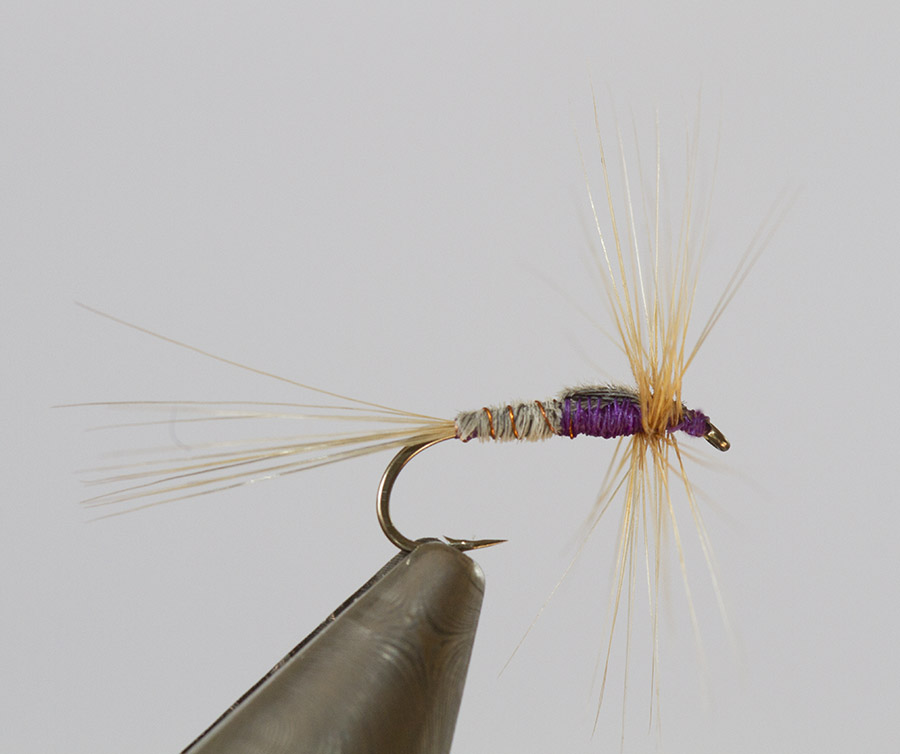 In researching this piece I am indebted to Bill Latham, a fly-fishing guide and chalkstream expert ( This email address is being protected from spambots. You need JavaScript enabled to view it. ), Dr Cyril Bennett as mentioned above, Davie McPhail and to Ed Herbst. 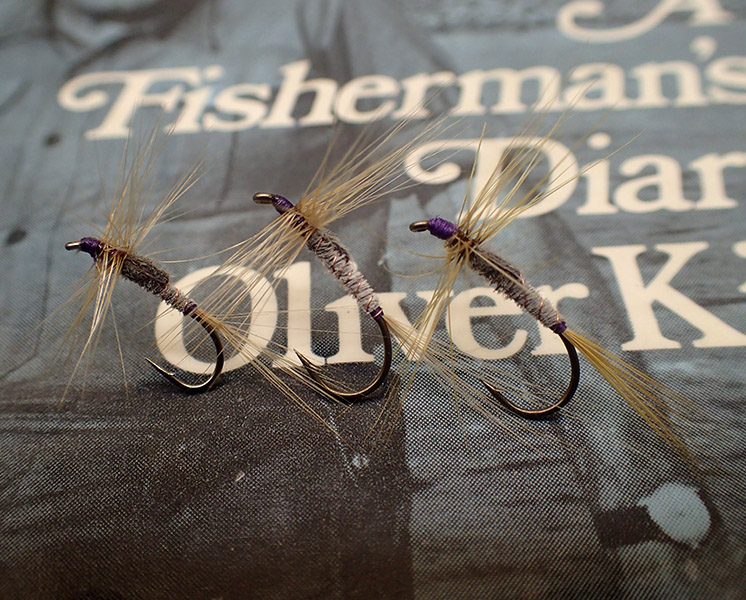