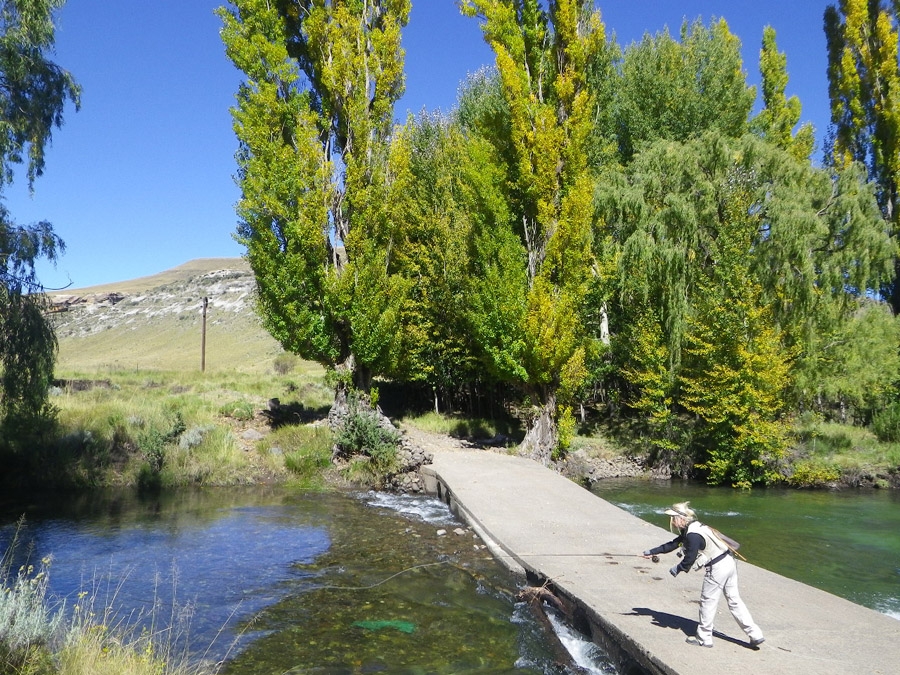 A Festival of Rivers by Ed Herbst. 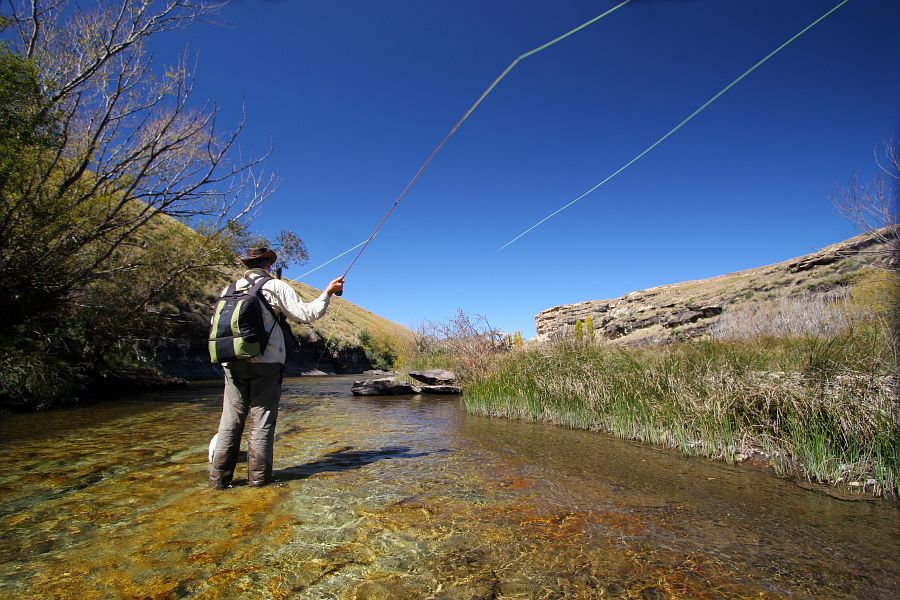 The format is the same in each case. You arrive and register, you are allocated a guide and a beat for each day’s fishing and the evenings are devoted to piscatorial conversation, good food and drink and fly tying.

The benefits of such events are significant. I have made enduring friendships at these Festivals and what I have learned from the guides about angling and fly tying has resulted in more trout being caught and greater enjoyment.

I have previously written profiles on Dave Walker and the last Epson Festival I attended in 2013 for this website.

Some of the country’s top small stream experts were in attendance as guides. I recall watching in awed fascination how Tim Rolston tied a #18 parachute in about two minutes.  He subsequently went on to produce a fly tying DVD which is pure gold dust and essential reading for those who love Lilliput streams and want to learn more about the tackle and tactics required for such situations.

Mike McKeown of Frontier Fly Fishing in Johannesburg is an always-welcome fixture at the Rhodes Festival.  Besides being a fount of knowledge on small stream fly fishing he is also the auctioneer of the various items donated to the Festival and the proceeds go towards the various charitable endeavours undertaken by the WTA. In 2013 some of the proceeds were donated to the local municipality which spays dogs belonging to local residents at no cost.

Frontier always donates generously to such events and in 2013 a lucky bidder got one of the ultimate small stream fly rods, the 7 foot 9 inch Sage Circa 2-weight at a price considerably lower than its retail value.

Each year participants at another Rhodes festival, the Stoepsitfees (porch sitting festival), knit squares which are then sewn into blankets and auctioned at the Fly Fishing Festival.  The proceeds then finance the purchase of blankets for the oldest residents at the nearby Zakela township. 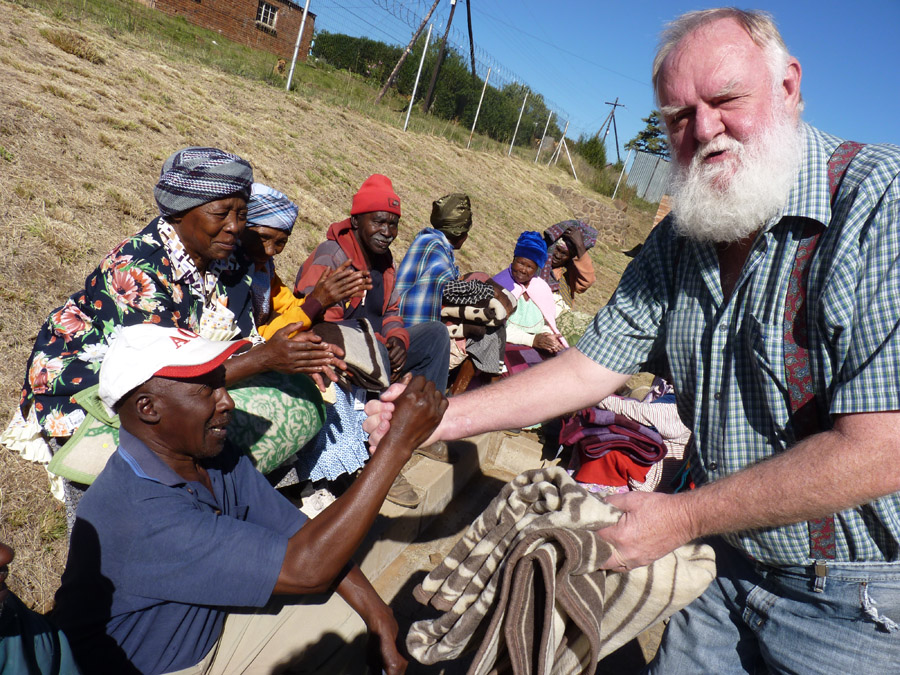 Dave Walker hands over blankets bought with the auction proceeds to Zakela residents.

Rhodes resident Tony Kietzman, who writes regularly for the Spirit of Flyfishing newsletter, will be in charge of guide and beat allocation again this year and he tells me that local rivers and streams are looking good. The recent prolonged drought has broken but it did have the beneficial result of killing off a lot of small trout which has meant that there are now fewer but bigger fish and they are in outstanding condition. 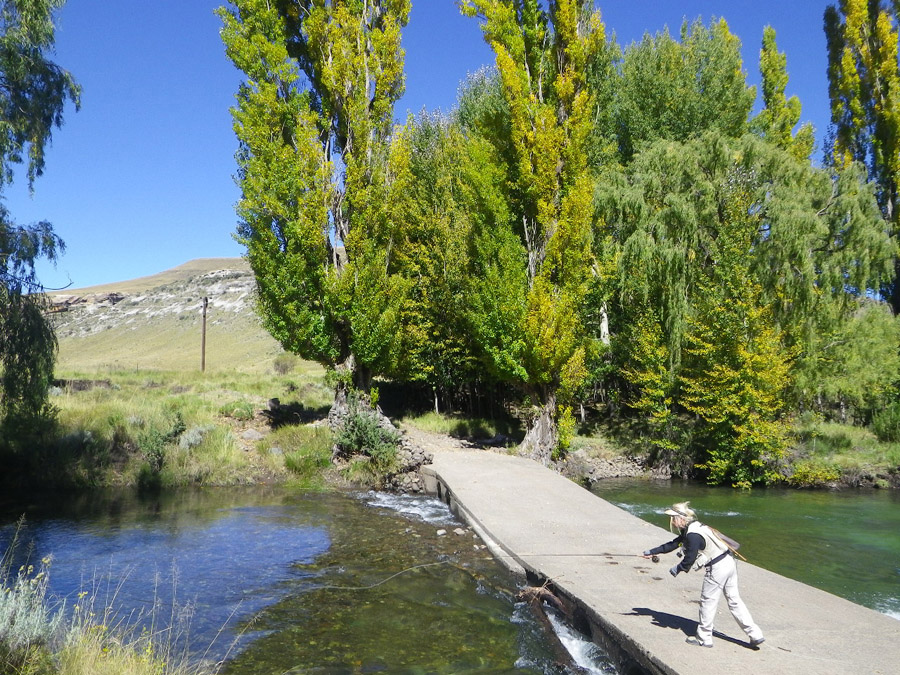 When the river levels drop in Rhodes and Barkly East, areas lower down on the escarpment such as Maclear, Lady Grey and Ugie still provide good fishing and nobody knows that area better than Jacky Steytler Lamer who will be guiding again this year in Rhodes 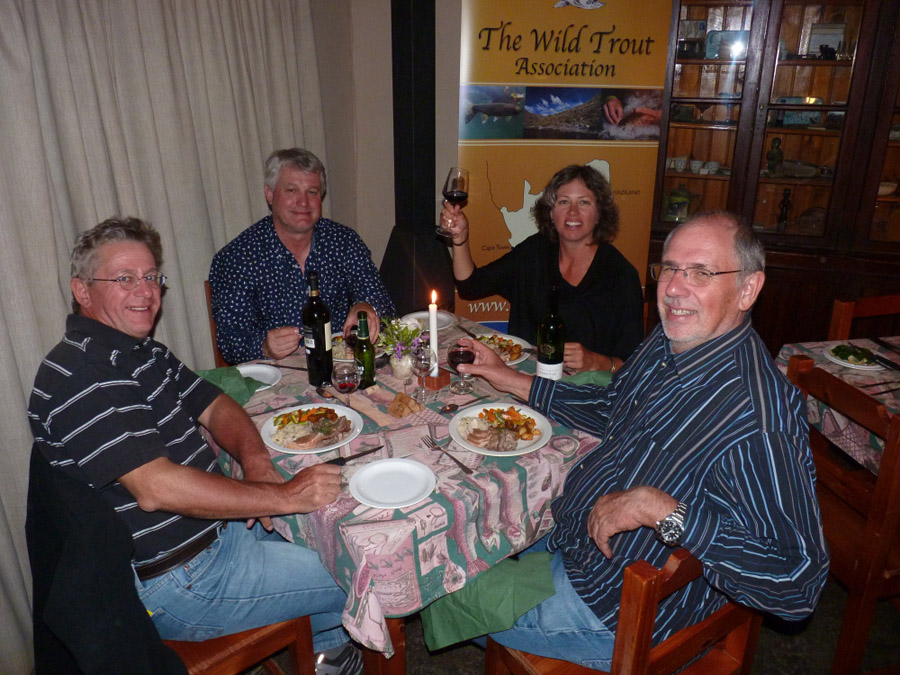 Jacky Steytler Lamer, one of the guides during the Festival, proposes a toast to the Wild Trout Association during the 2013 event.

The Cape Piscatorial Society festival has been centred at Merwida Country Lodge in Rawsonville for close on 20 years. This is trout country, wine country and the staff at the Lodge are excellent caterers so the event always runs smoothly.

I attended the November event last year with Andrew Ingram and sat at a table with a fly fishing novice, Lourens Bosoff and their guide Jean Bence 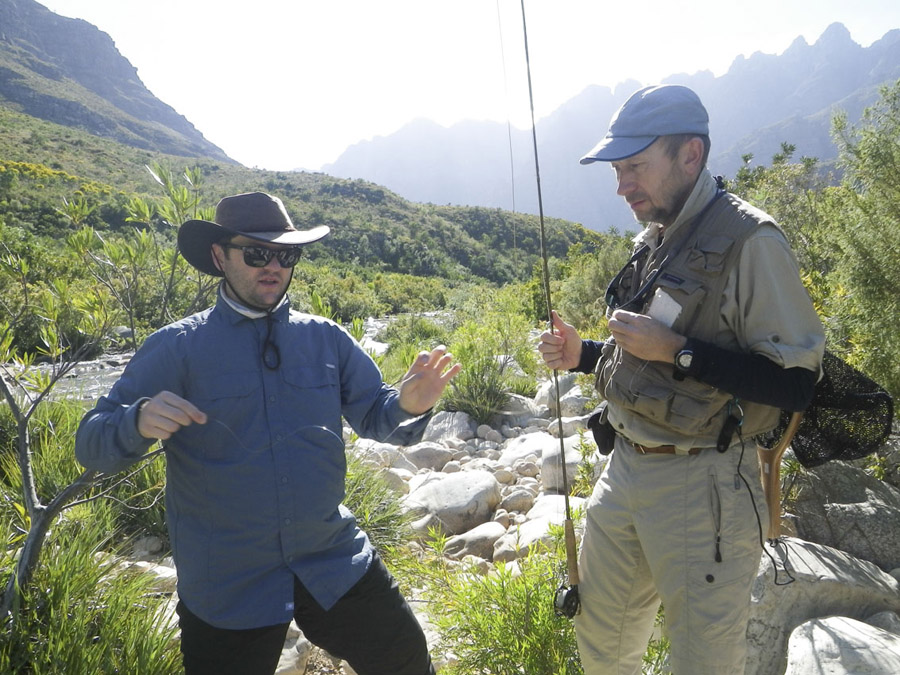 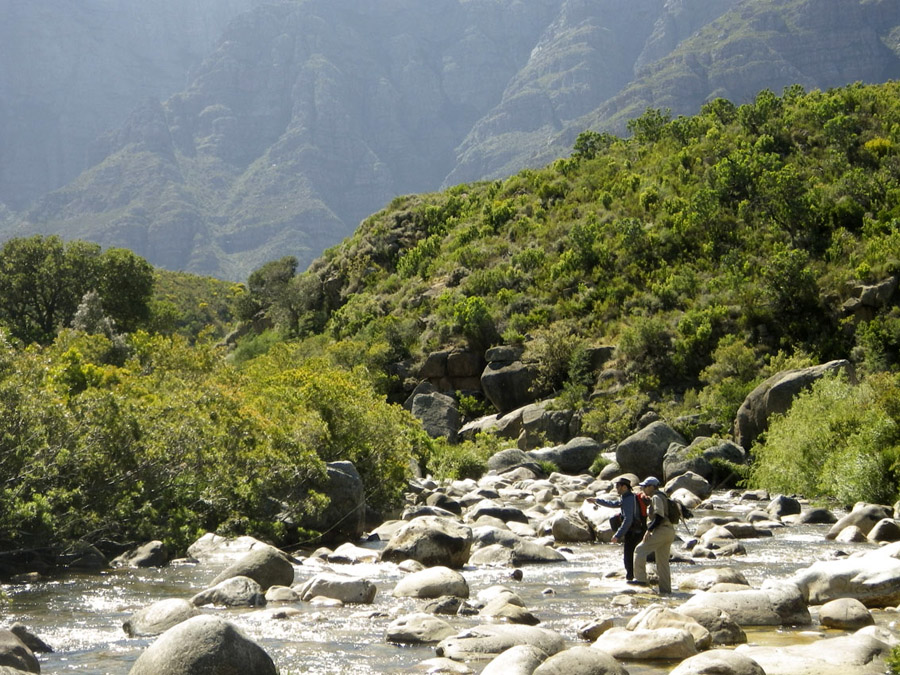 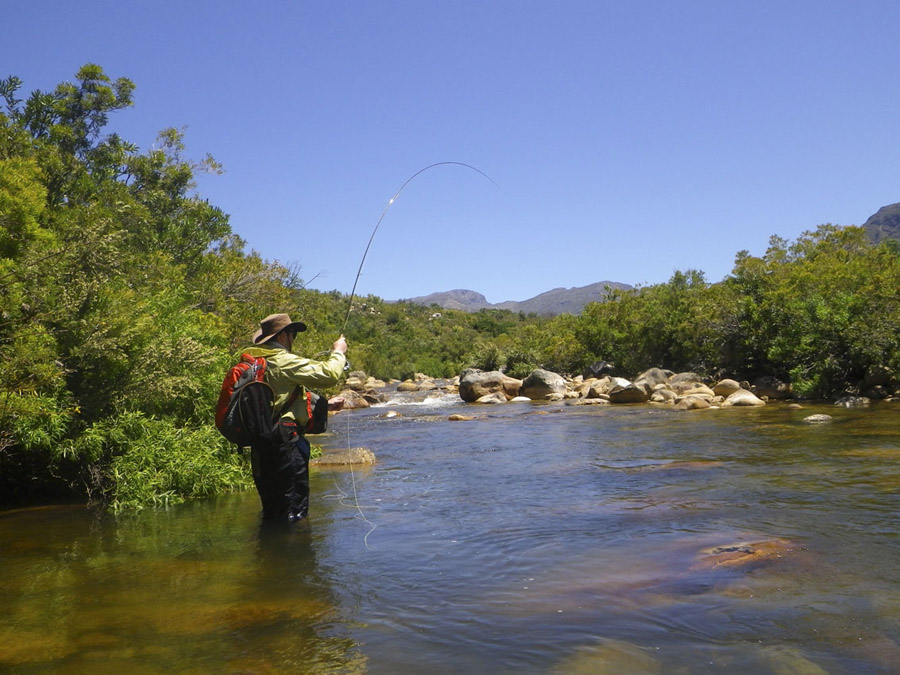 River Festival guide Jean Bence showing how it is done 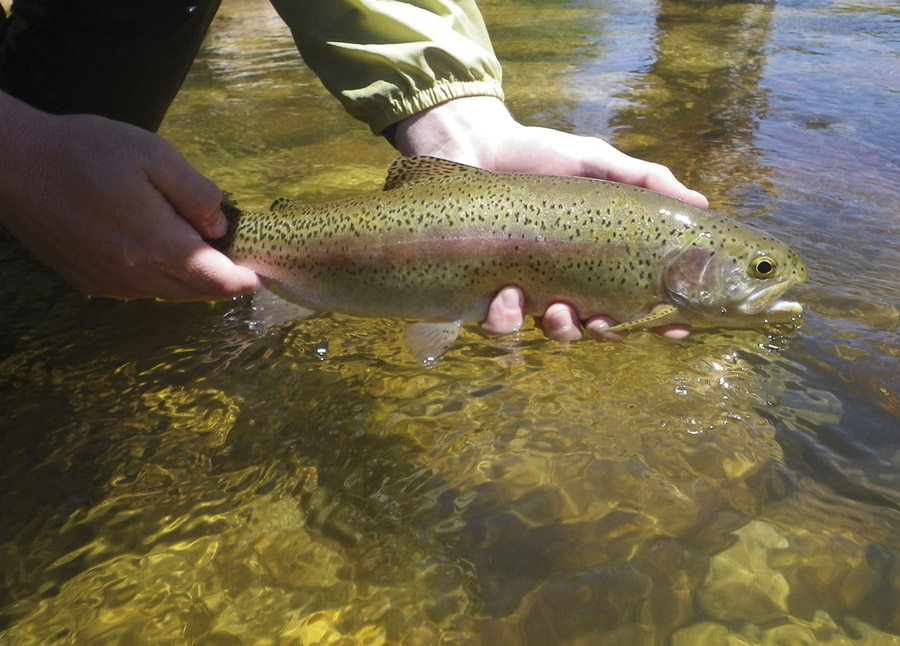 One of the innovations of the 2014 event was to bring on board as guides some of the province’s young competition anglers and what a delight they proved to be. They live fly fishing and tying and have, through the internet, absorbed huge amounts of knowledge. Along with their peers they are in the vanguard of advanced tactics and are never afraid to innovate. When the light faded outside they did not move, they simply used camping headlamps to carry on tying flies at a frenetic pace. 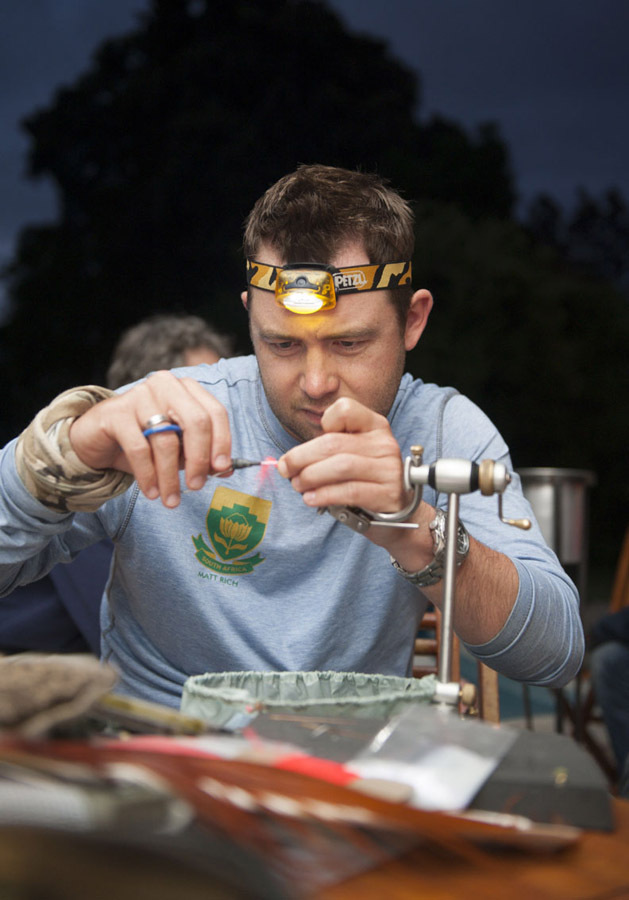 Matt Rich, one of the competitive fly anglers who guided at the 2014 Cape Piscatorial Society River Festival. 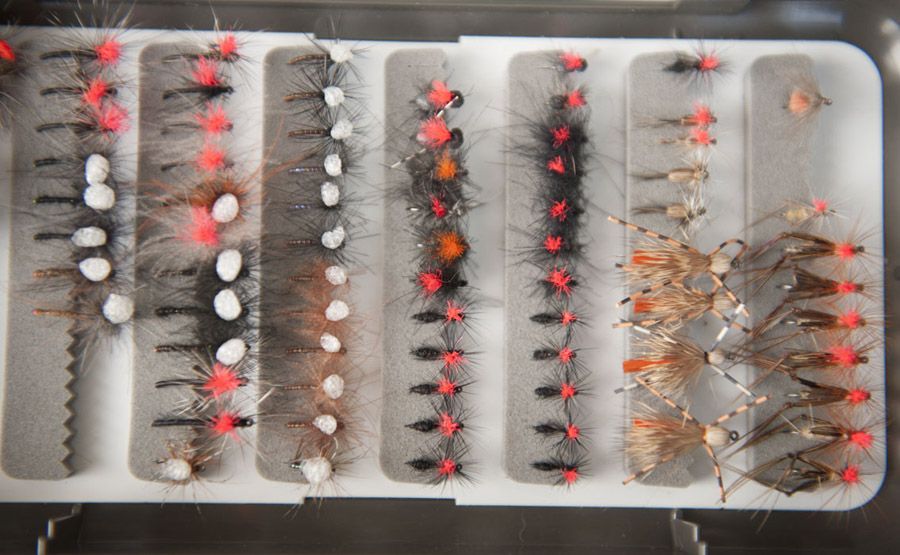 I approached Frontier Fly Fishing in Johannesburg and asked them to donate a rod to the raffle and they very generously donated a Horizon 1 weight matching reel and a Sci Anglers line. To my delight I found that Upstream Fly Fishing in Cape Town had donated an identical outfit. We also had a Wychwood from Craig Thom at Stream X, Andrew Ingram was delighted to win a Stealth 4 weight on the raffle and Jandi Trading also donated one of its Explorer rods

Whereas the Epson Festival in Rhodes auctions donated prizes, the Rawsonville function uses a raffle.

The Master of Ceremonies was Gordon van der Spuy, actor by profession, fly fisher and fly tyer by inclination, who conducted the raffle and patiently explained his simplified method of tying the deadly Para-Rab to a fascinated audience. You can contact him through this website if you would like lessons. 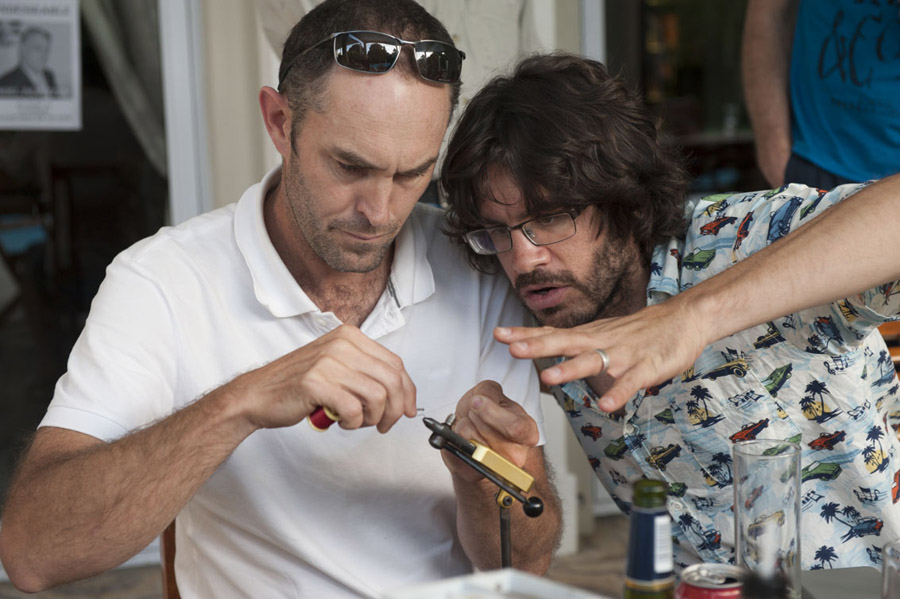 I tried the Horizon on the Merwida swimming pool and it proved a delight, effortless to cast, beautifully finished and costing about a third of an equivalent top name brand rod.

Lourens learned a lot, caught his first trout and won a fly rod on the raffle. He was very happy that he had invested time and money in attending the event.

There are similar events elsewhere in the country and another that would be well worthwhile attending is Hobson’s Choice, an October event run by Alan and Annabelle Hobson of the Angler & Antelope in Somerset East.

The town is unusual in that it has four biomes within twenty kilometres which provides as many fly fishing opportunities as there is diversity in the landscape. The challenge is to catch trout, bass and yellowfish over 30cm on fly on the same day. 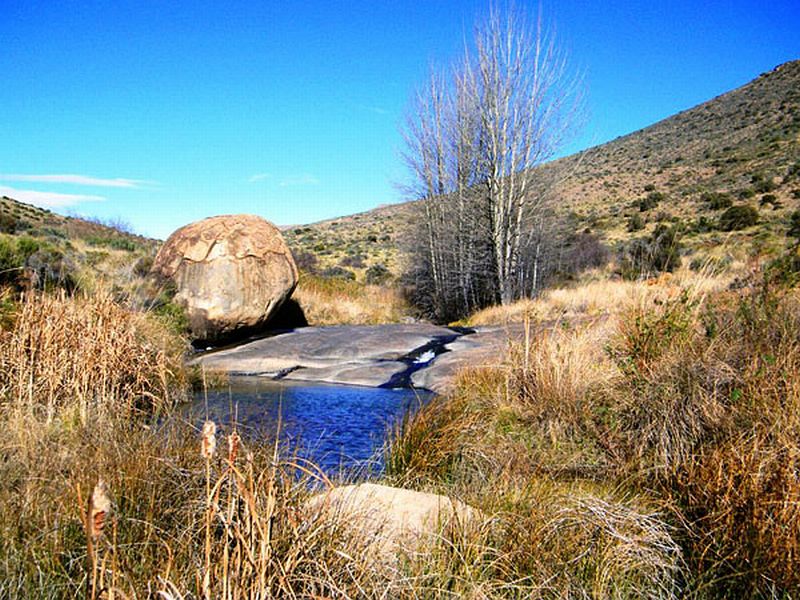 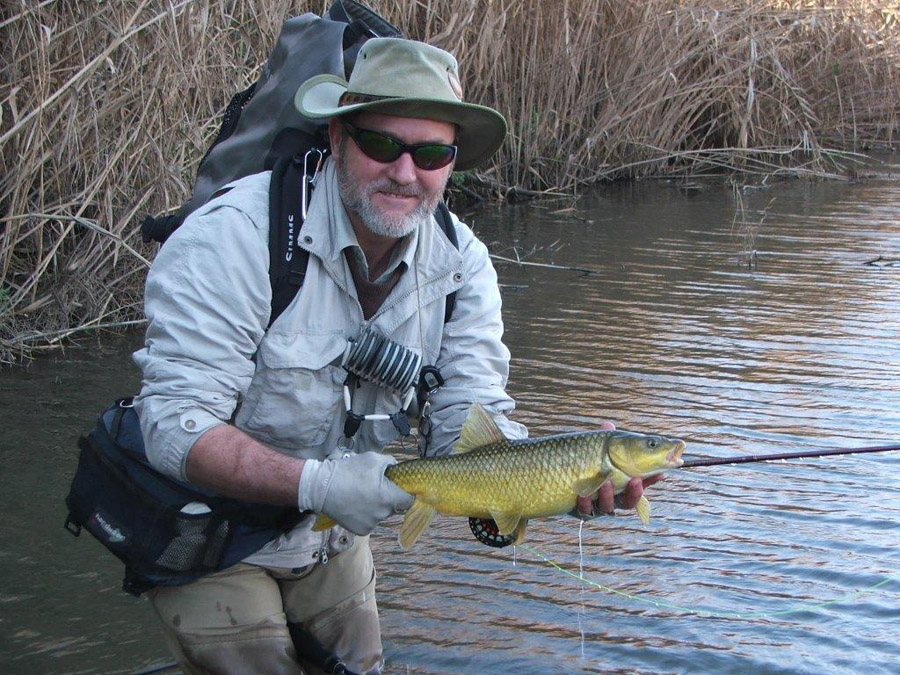 The Little Fish River south east of Somerset East receives water via canal systems from the Great Fish River, which in turn receives water from the Orange River coming from Gariep Dam. This water is full of smallmouth yellow fish and, as bass dams are also plentiful in the Karoo, the chances of catching all three species in a day are extremely good. With a bit of luck and some more effort, you could easily add a barbel to your tally.

Three River Festivals – the Epson in Rhodes in March, Hobson’s Choice in Somerset East in October and the Cape Piscatorial Society River Festival in Rawsonville in November.