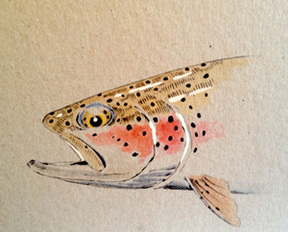 Do convex leaders have advantages? Article by Ed Herbst and photos by Mike McKeown.

Convex leaders came to mind after a recent discussion with Mike McKeown of Frontier Fly Fishing in Johannesburg which organises trips to Lake Strobel (aka ‘Jurassic Lake’). Gales are routine there and I wondered if convex leaders might be of some use in such conditions

Here is a chronology of references relating to the concept;

Al McClane in the 1975 edition The Practical Flyfisherman lists what he called a double taper leader: 'While not many people use double-tapers, this design has a definite place in casting fanwings, large bivisibles, or hair wings, all of which tend to increase drag on unrolling line.

Here is his formula for a trout leader: 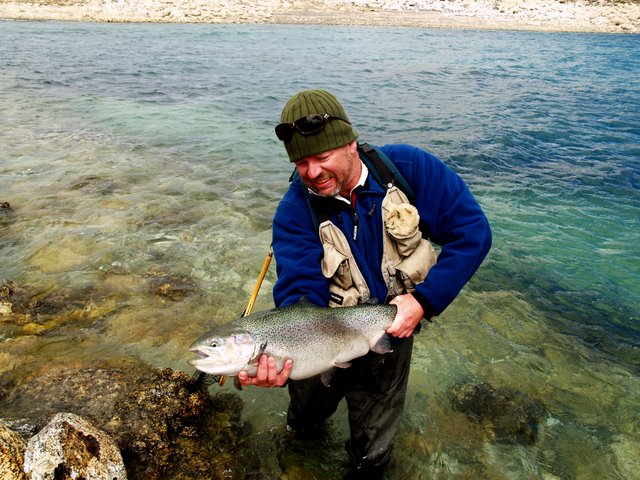 The September 1981 issue of Trout and Salmon carried this article: 'Beating the Wind' by George Beall

A 'NICE WAVE' is a prerequisite to a good day's fishing in many parts, yet more often than not the wind is also a frustration for the fly-fisher. Aside from changing position - when possible - so as not to be obliged to cast against it head-on, there are other ways to cope.

An obvious answer is to use a powerful rod and heavy line but this can be self-defeating, since a powerful rod you are not accustomed to using will quickly tire you, especially with the added effort required in casting against the wind; the end result will be hopeless floundering. Casting against the wind is possible with some ease and comfort provided you are properly equipped and a reasonably-skilled caster.

If you have the choice, for a windy day select a powerful rod that you use regularly and cast well with, keeping in mind that the longer the rod, the greater will be the wind resistance. A long rod - 9 ft or more - for size 4 or 5 lines is pretty hopeless against anything stronger than a breeze. I prefer cane or carbon-graphite rods to glass because of their thinner diameter and lesser wind resistance.

Next, use a heavier, and above all, denser line. Most rods will take more than one line-weight; use the heaviest line your rod will take. An 'intermediate (silk or silk-equivalent) or a sinker is denser, thus thinner than a floater of the same weight and hence penetrates the wind better; well-greased, they will do a floater's job acceptably. A line with not more than 18 inches of level end will turn over the leader more efficiently than one - even heavier - that has too long a level end. A weight-forward sinker seemingly will accomplish miracles against the wind.

The terminal gear is most important. First, bulky wind-resistant flies such as large Wulffs will give you much trouble; avoid them. More aerodynamic dressings like sedges and stonefly (dry) imitations, or nymphs and streamers, will be far easier to cast and finally more effective. If you must use dry flies with upright wings, keep patterns small.

The leader, like the line, is the crux of the matter. It should be shortish (no more than rod length) with a fast taper (no knotless leaders, please!); the tippet should be shorter than usual, of stiff nylon and a size or two heavier than normal. A long, light tippet - say more than 50 cm of nylon lighter than 3X - will simply fold up in a heap on the water when cast into a strong wind. (Incidentally, light leaders can be an advantage even on a windy day when fishing eddying currents where instantaneous drag on the fly is a problem. Piling up a heap of long, light tippet here with the wind's help will allow the fly a drag-free float).

I have carried this idea a step further and made a weight forward which turns over so strongly it is usable only against the wind.

Finally, casting tricks. The wind is stronger at waist or shoulder level than it is just above the surface. Hence a side cast, with the rod held parallel to the surface and just above it in this zone of lesser wind strength, will be easier to throw than will an overhead or over-shoulder cast. To make it easier to cast low, crouch down, or even kneel if possible. The cast, whether side, overhead, or in between must be driven out with a full arm thrust, turning over the wrist forcefully just as the rod and arm straighten out in front.

With an overhead or over-shoulder cast, drive the rod right down to the surface and do not check it at the normal 9 o'clock position. Charles Ritz states that full realisation of the power potential of rod and arm can be made in such casts only with the rod grasped with the thumb on top of the grip. I fully agree. Give the line a short, sharp pull just as the rod and arm straighten; this helps the leader turn over and lay out correctly.

Any shelter from the wind, especially for the rod and rod-arm, will help. A big rock, a bush or two: anything that breaks the full force of the wind against which you must drive the rod saves just that much more power for throwing the line into the wind. Every little bit counts, and the sum of these tricks and tactics can mean the difference between fishing and not fishing when the wind is up. 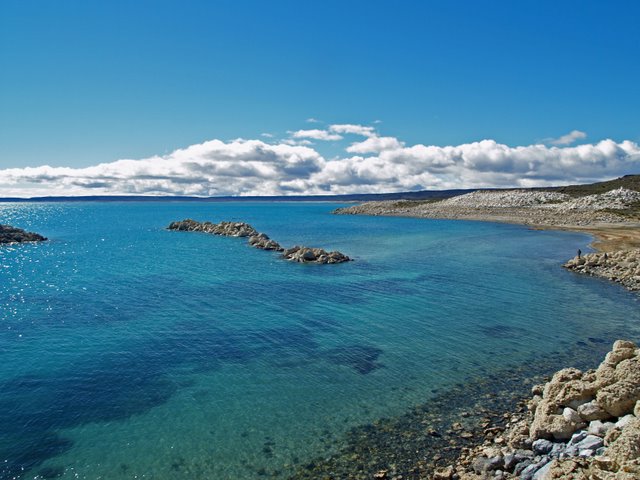 The clarity of the water at Jurassic Lake is exceptional

The September 1983 issue of Flyfisherman carried this article by Bernard B. Beegle:

Improving the design of the standard straight-tapered leader has been a most neglected aspect of fly-fishing. If you want proof examine the literature and you'll find a wealth of information about improve- merits in fly rods, reels and lines, but not leaders. The lack of progress is especially ironic because the leader is an important tool in a fly fisherman's arsenal. If you'd like something better than the old straight-tapered design, try the convex taper. Its concept represents a real challenge to the straight taper; and it should improve your fly casting and may even help you catch more fish.

The convex taper’s design concept is similar to, but not exactly like, the weight-forward fly line: This concept is based on a law of linear momentum, but you don't have to be an expert in dynamics (the study of bodies in motion) to understand it. The concept is based on the principle that the momentum of a body in motion is directly proportional to its mass times its velocity. The weight-forward concept, therefore, is to place more weight toward the front of the fly line so that it will have more momentum during the forward cast. The more momentum it has, the greater is the need for opposing forces - air resistance, friction, gravity - to stop its motion.

Then why not apply this same principle to the design of a leader - move the thickest sectional-lengths (the butt sections) toward the forward end?

You might think the best design would be exactly like the weight-forward line. Not so, because in such a design too much weight would he toward the tippet and not enough in the butt to turn the leader over and maintain the transfer of power through a smoothly flowing taper between line and leader. Furthermore, the end of the leader near the tippet would become too heavy, could he seen easily by the trout and would make a delicate presentation difficult. The best design incorporates a modification to only the leader butt sections and leaves the remaining sections similar to the old straight- tapered design. However, this change does move the heaviest and stiffest sections toward the front, incorporating, in part, the principle of the weight-forward fly line.

The new design is shown in Figure 1 which also shows a straight-tapered leader, for comparative purposes. Notice that the three butt-section diameters of the convex design and the first two sections of the forward taper have been increased. This was done to maintain a smoother transfer of power from line to leader and on through to the tippet.

By applying complex dynamics formulae, it can be proven mathematically that the convex design will turn a fly over easier and cast it farther than the old design. But the real proof, the one important to the fly fisher lies in his testing this new design for himself.

Construct both leaders as shown in Figure 1.  You don't have to attach them to a fly line and cast them with a fly rod to see and feel the blessings of the new design over the old. Just grasp the butt section of each leader in your casting hand and give each a try, alternating between the old and the new design. I have done this many times to demonstrate to fly fishermen the blessings of the convex taper. Each angler could tell just by observation which leader was the convex taper. During both the backward and the forward cast, this design turned over better and with less effort-especially during the forward cast. The leader comes through in a tighter loop and straightens out much better. Furthermore, the convex taper exhibited an extra kick at the end of the toss, the tippet landing in a serpentine pattern as expected, the caster not having to mend the toss to achieve this.

In my opinion the convex-tapered leader is superior in every respect to the straight taper. And, if you want an even more striking demonstration of its superiority, apply the concept to 12- and 15-footers. This design will make long leaders easier to cast, to control and to place on target. The proof, of course, is in your test them. Give them a try. 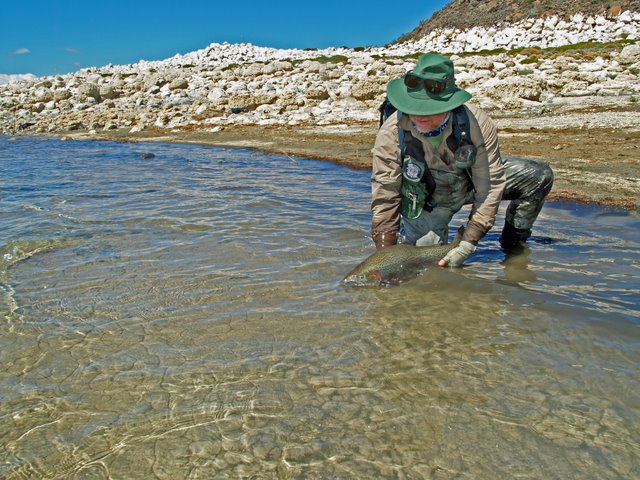 The bible on leader design is Joseph Kissane’s book, Drag-Free Drift: Leader Design and Presentation Techniques for Fly Fishing and in a recent online posting he expressed some doubts.

‘I have used a convex leader but didn’t care much for the results, perhaps because I hadn’t taken the time to think about the way to cast with it. A weight forward line tapers with a heavier front section that assists in accelerating the line speed, and the thinking seems to be that the same holds true for the convex leader. But if you’ve already accelerated the line, and the very tip of the line is moving well enough, a thinner butt section may cause a hinge and not transfer the energy as efficiently as you need. I like loop connections for their convenience, but am not a fan of their tendency to hinge if you are not really paying attention to the casting stroke at the very end of the cast. Perhaps I’m a lazy caster, but I prefer a nail-knotted butt section on my lines, now, and blood knot the leader to it. To each his own, though.’ 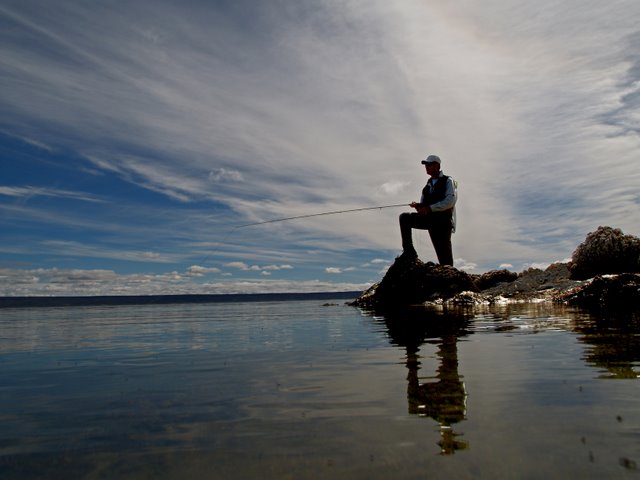 A rare calm day on this river-fed lake