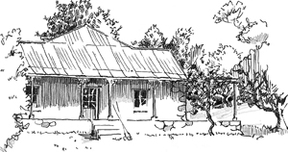 One nymph to rule them all.

A visit to Shangri-La - which for me may happen only once in a lifetime, was a high and rare privilege and a trip with my son that is unforgettable… Words and pictures by Hugh Rosen.

If you are lucky in your fishing friends, you have won a lottery of life. During the northern hemisphere fall I received an unexpected invitation (thanks D.M. and the Family G) to fish a very private many-mile stretch of fine, spring-fed Eastern Sierra trout stream.  I had heard of this legendary stretch of river, but had never imagined that I might ever enjoy the courtly and most gracious Southern hospitality.  I was especially fortunate to have been able to have Junior with me for the long drive and the fishing and camaraderie. 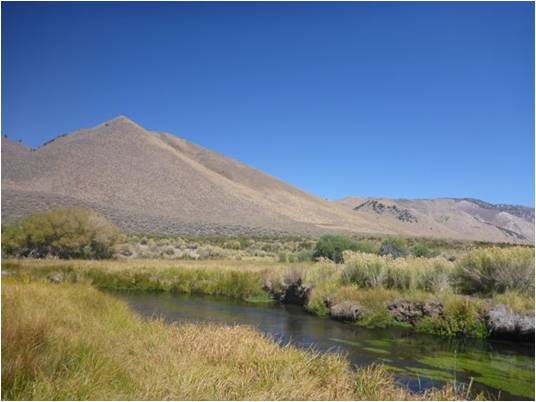 At more than 7500 feet above sea level, sandy, gravelly high desert hills that would have graced a classic Western movie, give way to a meandering, spring-fed stream. Each bend has an undercut bank, and a bend pool.

This is a rich eco-system with the stones in the shallows covered in cased caddis larvae, and even in the cool of fall, the late afternoons were peppered with the suicidal intent of the grasshoppers, throwing themselves on the water and then struggling upstream.  These cursory observations suggested that hopper-dropper combinations might be effective. Indeed the first brief session in high winds , just stepping out of the Fishing Vahrvernugen after 500 miles, saw a brown take a DDD and a rainbow hang on to the  bead head hare’s ear nymph with the splendid scarlet glo-brite floss butt under the  mallard tail. The fishery is all wild and has been for a generation. The sleek, aggressive rainbows are almost bronze in color, and so reminded me of the bronze brown trout on the Halford Mottisfont Abbey beat of the hallowed Test. 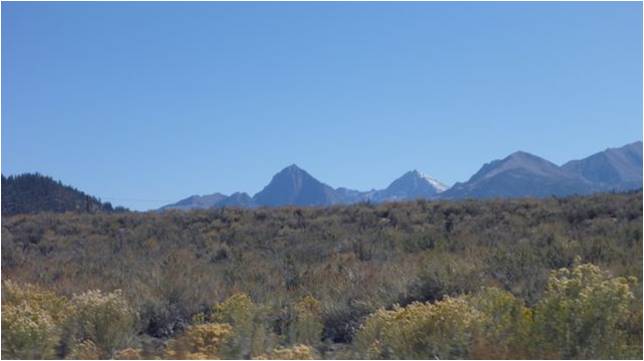 The crisp change in the weather, with sharp frosts overnight also signaled to the wild brown trout that spawning time was just around the corner. Fat, roe-filled fish in the pink of condition were moving upstream and holding in the bend pools. Our host provided us with guides, and Junior and I were incredibly lucky to fish with both Harry Blackburn http://mammothfishing.com/contact-harry-blackburn/ and Brad McFall.  I will fish with them again.  Junior is not much of a fisherman, as his temperament requires catching more than fishing. The tutelage and pedagogic brilliance displayed by the guides, kept him fishing for a proper, full fishing day and catching too, sometimes, in the words of the Immortal Rumpole, 'Alone and without a Leader'. He proved to be quite effective with the nymph and caught some decent browns that definitely put a smile on his face. 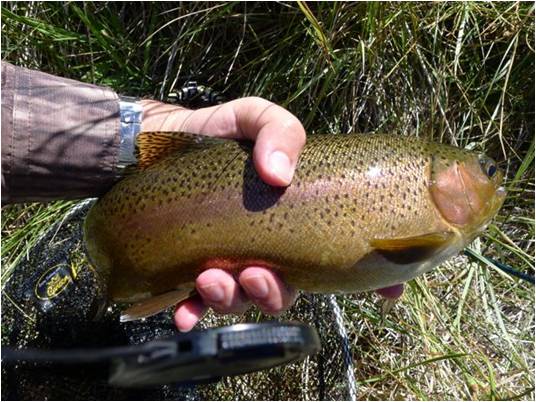 A few nice fish took the big hopper cast downstream and worked upstream to trigger strikes. These were slashing strikes and jumps that gave more than a few heart-pounding moments of excitement, and then the magical smile of a dad landing a good fish for the young man. It was more than fishing, more than fun, and the creation of indelible memory. 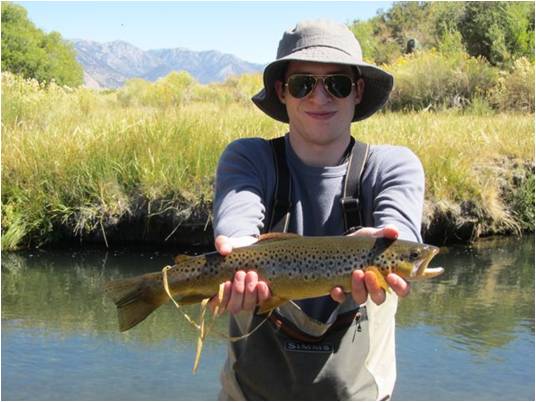 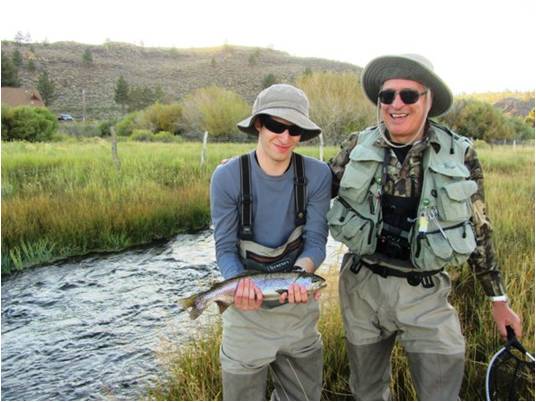 I am not known as a nymph fisherman. To be fair, I am not known as a fisherman at all, but as a Shrubber.  Fortunately these high desert streams are shrubbery-challenged and the bonsai-stature of the shrubbery means that even I can keep a fly in the water more often than is usually my lot. While the cool mornings were a little slow, one could look up into the sun and see the dance of the tricos and around 11am the caddis larva began to move, and the pools and riffles were alive with flashing and finning movement. It was the duffer’s hour of great content. The bulk of the fish, (and they were all wild, and more than could be counted) were taken in clear water to sight fished little nymphs. The ones I used were tied on Partridge ideal nymph hooks size 16-18 for the Red-Butt Hare's ear (the most productive fly by far when the cased caddis were moving), the orange bead Pheasant Tail Nymph and the Mini-Prince. The little Zebra Nymph worked well in a size20, and the same for the tung-head Polish quill. I was introduced to the amazing, one and only Tom's Working Nymph (not mine - from Tomaz Modic) in Slovenia. 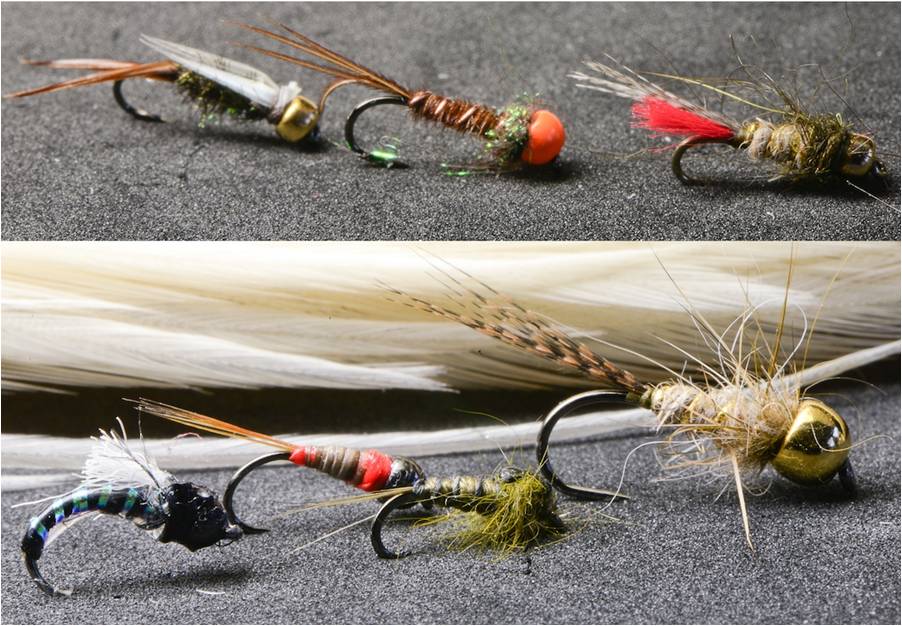 The Red-Butt Hare’s Ear took the 19.5 inch rainbow with multiple jumps and 4 screaming runs off the reel.  I laughed because I was fishing a 4-weight, with a 5X tippet.  Brad McFall had just said to me that my drag was a little light, so I tightened it up considerably and the fish took the nymph at the end of the drift and took off in fast flow. It was a breathtaking fire-drill, and with more luck than skill, and with a heart-stopping dive into the undercut bank, the fish was eventually tailed.

Fished as the hopper-dropper, the experience was magical. Even in the bad Californian drought, the river with its springs, and strong flows, and fish migrating up to spawn, is a rich and stable habitat. To fish Shangri-La, which for me may happen only once in a lifetime, was a high and rare privilege and a trip with my son that is unforgettable. Nature in its beauty and bounty, and humankind in rare moments of peaceful pursuit – how fortunate these mortals be. 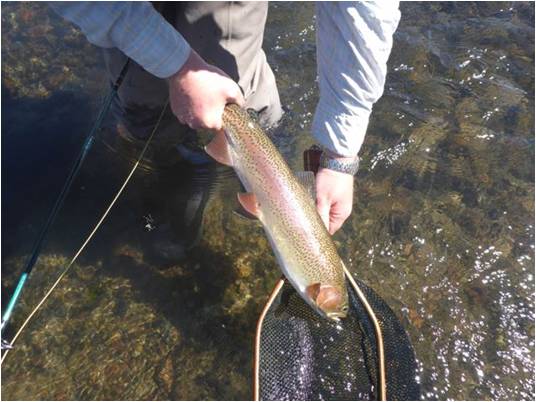 (Hugh Rosen is a molecular medical research scientist and Professor of Chemical Physiology with the Scripps Research Institute in La Jolla California. He qualified in medicine at the University of Cape Town. Tom Sutcliffe.)