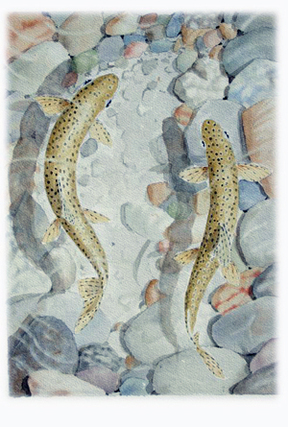 (Nick is a renowned bamboo rod maker living in Monaro near Canberra in New South Wales, Australia. We have shared emails on a regular basis for some years now but I found his most recent missives so interesting I asked his permission to publish them on my website. Happily he agreed! To see Nick's website follow this link: http://www.taranskybamboo.com.au )

I spent a day out with my guide mate - Paul Bourne (http://www.snowymonaroflyfishing.com.au) – the other day on the Thredbo River, one of the larger freestone rivers in the Snowy Mountains in.  Access used to be quite hard going along it, though the road up along the valley meant that you were only a bit of a “bush bash” and hike back up to the road.  It was a wilderness feeling, but relatively accessible.  The ski industry and our National Parks have seen to that, and not for the better.  Half the river now has a “multi use” path along it, only a few metres from the river's edge, with 7 bridges crisscrossing it, and plans have been approved to complete the track along the rest of the river.  So now there are tours of mountain bikers, plus floating mattress and canoe trips from the local resort to contend with, along with all the associate rubbish and general stench of humanity.  They call it progress, apparently.

Despite my complaints, the river itself is holding up and so are the fish.  If you avoid peak holiday periods, keep your mental blinkers on to ignore the flashing by of lycra on bikes, and accept the fact that someone may “drop in” the river ahead of you, it is still a nice place to be.  Playing around with some Japanese style casting, I was really happy with some of the drifts that I was able to get.  With that long leader, and the “dip” in the open bottom of the loop, you can get the fly line/leader to “touch down”, while the leader and fly are still going out.  That gives you tension on the water to push in a big roll cast mend of slack, without overly pulling back on the top leg of the outgoing cast.  When the fly lands, you have enough slack out on the water to do some aggressive mending  without dragging back on the leader and fly.  Not that I got it right all the time, but when I did, I could really see the potential of the technique. 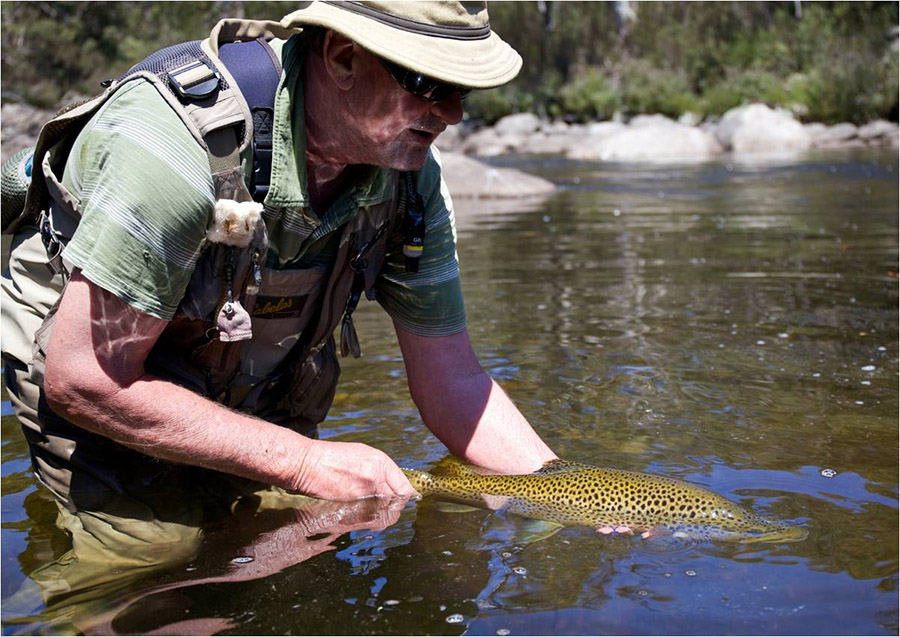 The Thredbo is a bouldery freestone with a mix of pocket water, runs and large pools.  It contains browns and rainbows.  The population is a mix of resident fish, and fish that run from Lake Jindabyne, either to spawn, or just enter the river after rain to feed, (or maybe the fish like being in a river more than a massive hydro lake - I certainly do).  Most of the fish at the moment are in the 1/2 to 2 pound range, but there are some larger fish here and there.

Paul managed one of over 4 1/4 pounds (we rarely measure or weight fish, but I took my weigh net for interests sake).  I cast to another fish, maybe a little larger, but for all my talking about these Japanese techniques,  I managed to stuff up with some drag.

In between we caught quite a few smaller browns and rainbows, all on the dry, including a pool-edge cruiser around a pound.  Paul put a bow and arrow cast to it, which allowed me to get a nice little sequence of photographs of it cruising up and sipping down the “Red Tag”. 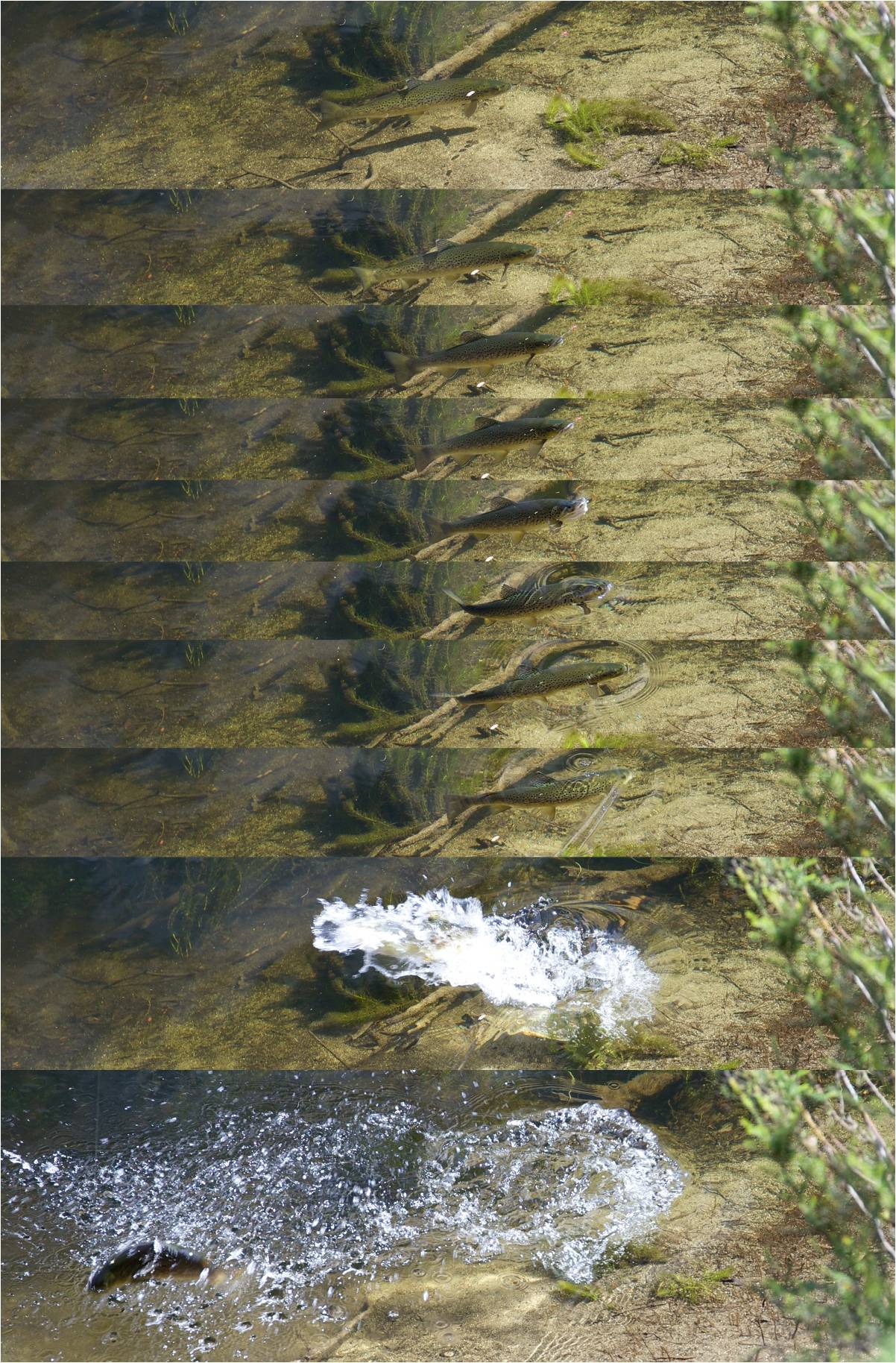 On the track out, we saw a beautiful Australian Copperhead snake, and Paul saw a tiny dragon of some type, maybe 1½ inches long, which he picked up for a couple of quick photos. 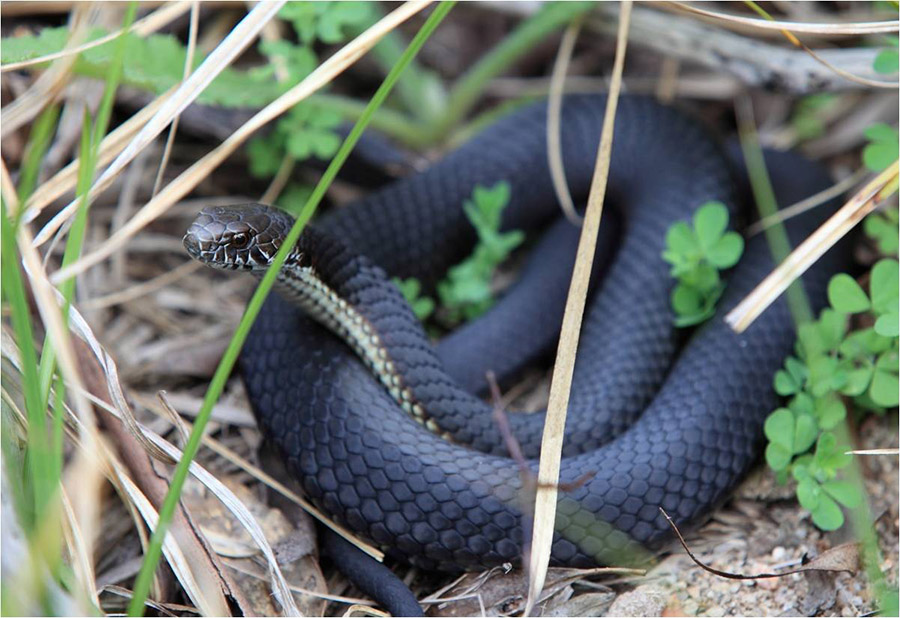 I’m sending some trial fly lines and leaders to Stephen Dugmore and I’ll put in a couple for you too.  They are a Sci Anglers made Double Taper, produced for the Japanese Market.  I’ll send you each two #3 weights (they only come in a #3 and a #4), one in “Surf” blue and one in Fluoro Orange.  They are made on a thinner braided core (12 or 15 pound) than most other lines, and a simple, short front taper.  I’ve found them really nice to fish with.
http://www.tiemco.co.jp/products/groups/view/331 (apologies - the LDL info is only on the Japanese version of the Tiemco site)

The leaders are 13 foot and 15 foot LDL leaders, from Tiemco.  These have a thin butt, and the technique allows them to be fished with an extra 3 to 6 or more feet of tippet, resulting in a total leader length of up to 22 feet.  The idea with the LDL technique is not to turn over the leader, but collapse it in various controlled ways, while still delivering the fly into saucer-accuracy.
http://www.tiemco.co.jp/eng/groups/view/1009

I hope you enjoy them and the lines.  For me it was quite a big jump to a new technique to have so much slack through the leader.  I can get the basics right, but repeatable accuracy is something I’m still striving towards!  The Japanese tend to fish very flexible rods in #3 or #4, and lengths of maybe 7’2” up to about 8’.  A big light bulb moment was letting go of the concept of “stopping the rod”.  As you can see from these videos, there is a pull through the forward cast that really folds the rod over and keeps is well and truly bent right through the forward stroke - a soft, full action rod is much easier to keep fully bent through the whole casting stroke.

https://www.youtube.com/watch?v=eZmp1idI3lw (look at the sneaky place he plucks a fish from at the 2 minute mark on this clip)!

The line goes along for the ride, with a dead straight top leg if you get it right.  (You know when you have it - if you get it right, there is absolutely no tailing loop, and in fact, as Peter Hayes says, it’s almost impossible to tail it once you have the rod fully bent and the line trailing behind.  But if you get it wrong, you can thrown the most spectacular tailing loops!)  Then you really drive the rod over and down, the counter flex that brings the rod tip back up leads to that “V” shaped bottom leg, giving a triangle structure to the loop (straight top leg, V on the bottom).  This shape, opposed to a parallel top and bottom leg, gives the structure to hold together false and deliver casts with such a long, thin butt leader, and the ability to drive the fly accurately, aimed by the top leg, and collapse the leader in a (hopefully) controlled manner.  All that slack then allows quite a bit of aggressive mending, “spending” some of the leader slack for long drag free drifts.  The choice of fly is also important.  The Japanese use a lot of CDC flies, to get the aerodynamics right.  Too much weight or bulk with materials like deer hair and it unbalances the system and the fly carries too much of its own momentum, rather than going along like a badminton shuttlecock. The Japanese use fine wire hooks as well.  Naoto designed the Tiemco 212Y for this sort of fishing.  As a side note, any Tiemco hook with a “Y” designation is for “Yamame” hooks - their native landlocked salmon, like a rainbow trout.

Striking with all that slack can be a challenge too, the fine wire hooks help, and an active strike too!

(side note – Tiemco has released a new version of the 212Y hook – the 212tr – which is on a slighlty heavier gauge hook – the same as the standard TMC100 – which I feel may be more suitable in waters where larger trout are a possibility):
http://www.tiemco.co.jp/products/groups/view/1131

I was lucky to spend a few days with Naoto, and he is even more impressive in real life than on film.  He can bob a fly in a quiet back eddy for ages, across a large amount of violent white water.  If it sounds like I am an expert on the technique, you’ve very wrong!  I have glimpses of what it is about but struggle with quantitative accuracy.  Still, I am having loads of fun with it!  Our Australian streams are also less boisterous than the Japanese ones, and we have mostly brown trout, so I think some of the collapsed leader deliveries will need some moderating in our more gentle streams.  There is still a lot of scope for its application here - I’m certain of that from the results a few friends and I have achieved to date.

Aside from the whole “LDL” techniques, the LDL flylines seem to me to just be a very nice line for everyday small stream use, so maybe try a normal leader on them too!

The glass rods that he designs are just a sideline though to be able to reach the wider market.  His true passion is bamboo, and he makes sublime rods:

Some information on his glass rods is available on the Tiemco website:
http://www.tiemco.co.jp/eng/groups/view/943