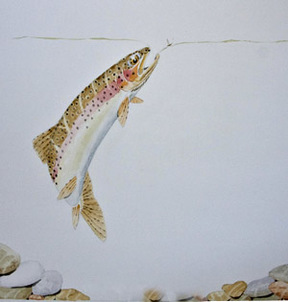 (Balloch is a working guest farm with excellent self-catering accommodation and stream fly fishing for rainbow and brown trout. It is 45 Kilometres north of Barkly East on the Lundean’s Nek road and 60 kilometres west of Rhodes in the Eastern Cape Highlands) 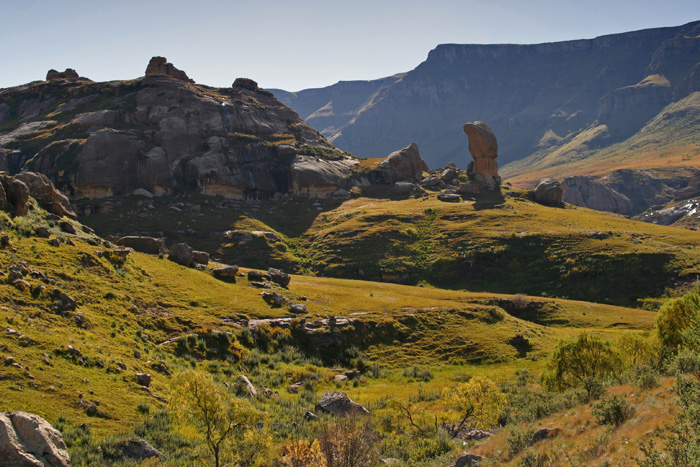 I guess Balloch is best known to us anglers for its fly fishing, and that’s understandable, though I agree with Margie Frost when she argues that Balloch has so much to offer the farm really ought to be appealing to a wider range of visitors. For a start this is hiking and mountain bike country, there’s interesting bird life and a fair sprinkling of San rock art, including an unusual piece depicting a lion chasing a group of fleeing people. The two people closest to the lion are attached to fine red threads leading to figures on-high that I assume represents the imminent intervention on their behalf of some kindly deity. 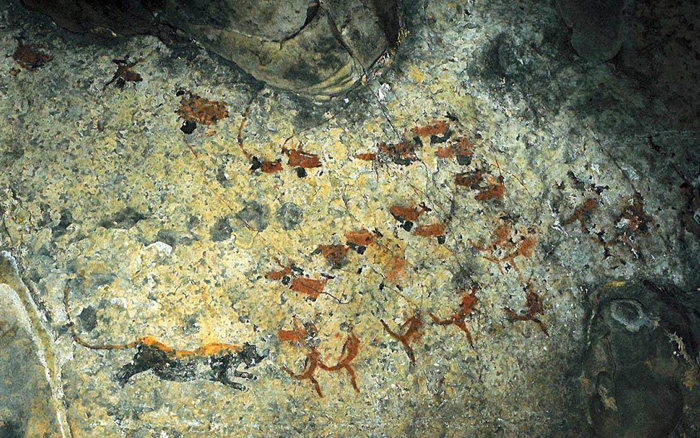 Balloch is at the end of a farm-road that winds into the throat of a deep valley. Owners Margie and Graham Frost are the third generation of Frosts on Balloch, Graham running beef cattle and sheep, but also doing pioneering work to secure a better deal for sheep shearers in South Africa. 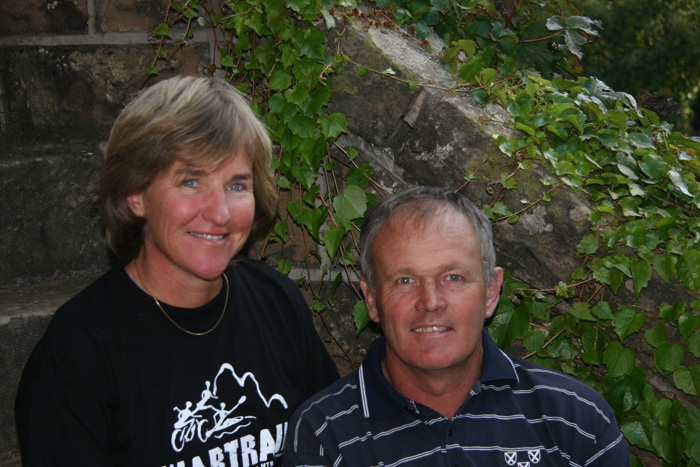 Margie operated a small trout hatchery just downstream of the house for longer than I can remember, supplying fish to farmers as far as Molteno, Dordrect, Stutterheim, Ugie and Maclear. She’s since packed that in to concentrate on the three guest cottages she has on the farm, all of which are hard by a trout stream.

The main house was built from sandstone hewn and shaped on the farm. It’s an interesting house in the sense that the stonemason who built it was a newly arrived Scot who had an eye for detail and a passion for perfection. Balloch was the first house he built out here and he completed it in 1926.  Every stone he laid he matched exactly on the opposite side, so if you study, say, the walls around the two doors leading onto the front veranda, the equivalent stones on each side of the doors and in the surrounding wall are exactly the same size and shape at precisely the same respective point. 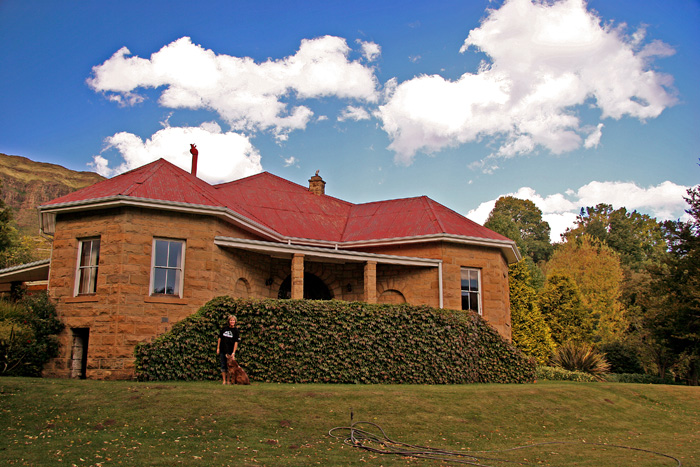 Balloch homestead with its unique stonemasonry. Try to catch the stonemason out!

When Graham first pointed this out to me a few years back I was a little doubtful, but once I started studying a wall I saw exactly what he meant. It’s an exceptional feat of stonemasonry and whenever I’m up there I spend a little time studying various sections to see if I can catch the young Scot out. I never managed it. The second interesting feature about their home is that no cement was used to bind the stones together, not even over the arches. The slabs were laid using a mixture of clay and mud dug on the farm and to this day there isn’t a crack in the place. 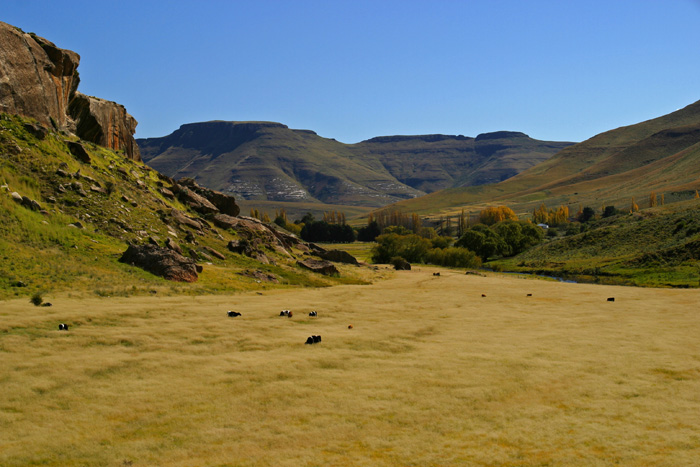 A field on Balloch

It’s easy to run out of adjectives describing the beauty of Balloch and I’ve heard many people say this is the most spectacular farm in South Africa and haven’t argued. The trout stream running through it is the Vlooikraalspruit (more commonly called the Willow Stream), with rainbows and occasional browns below a natural divide, a towering waterfall, and brown trout only in a magical mountain top stream above. 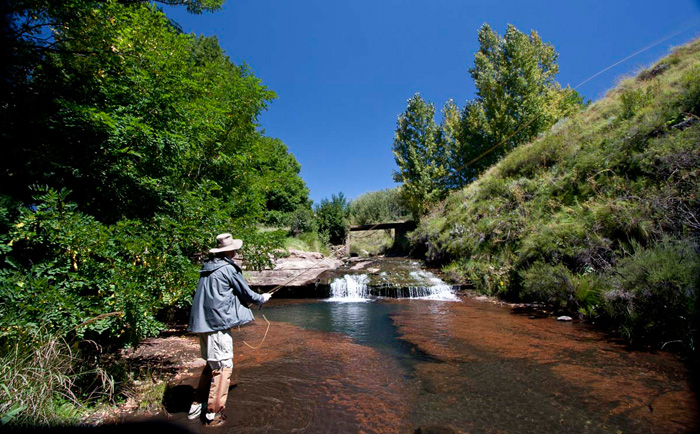 Robin Renwick on the Willow Stream below the falls, mainly rainbow trout water 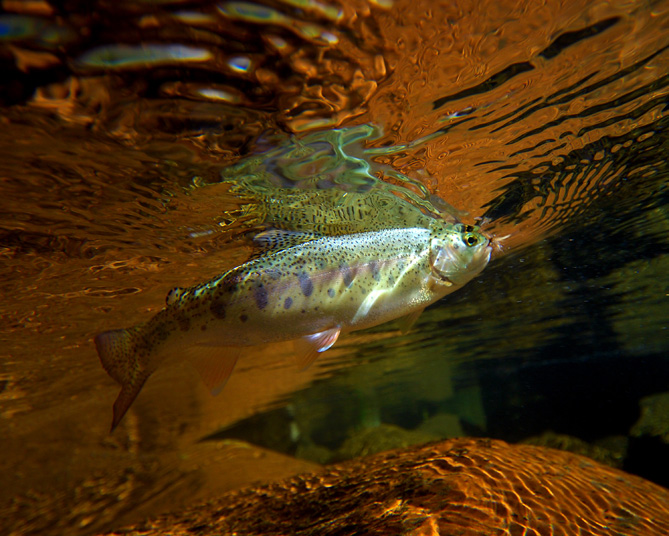 A rainbow from the lower section

Above the falls the Willow is a narrow, near transparent, wisp of a stream and the fishing is an experience that’s hard to match for challenge, or for the splendour of the place. This is a spread of sandstone landscape at its most grand and from the drift, where we often start, there are several kilometres of fishing available upstream. 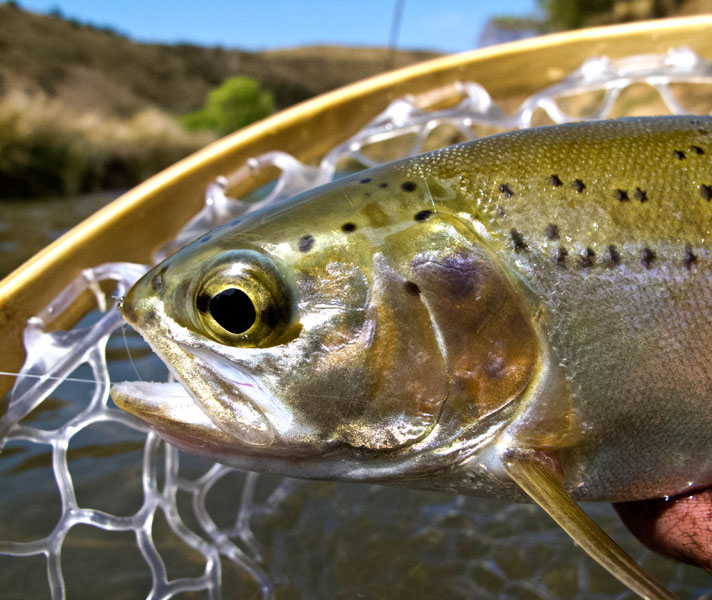 The Willow above the falls at the drift, a magical brown trout stream 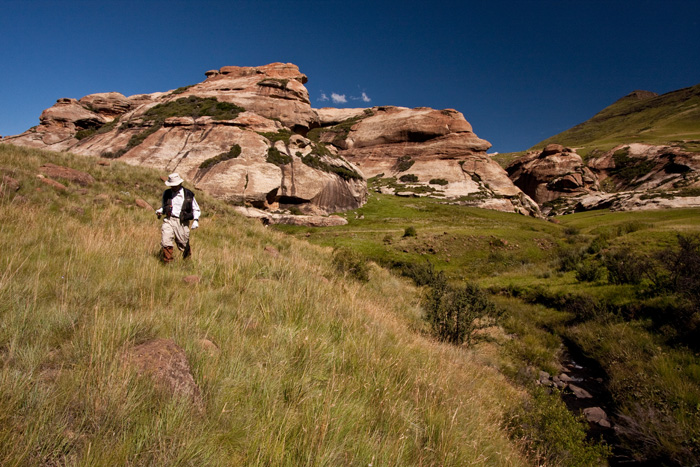 Clay Brendish above the falls with the Willow threading the valley

Below the falls rainbow trout are plentiful, but in the section above the falls you need to work for your fish. The brown trout average between 8 and 10 inches and as you would expect, a few get a lot bigger than 10 inches and they are all really pretty.  (You sometimes wonder, though, whether we’d go as crazy about the beauty of brown trout if they were as plentiful as rainbows and rainbows as scarce as browns. I’m not sure, except to say that the average brown trout wild grown in a stream knocks the socks off most fish I’ve ever seen for beauty. ) 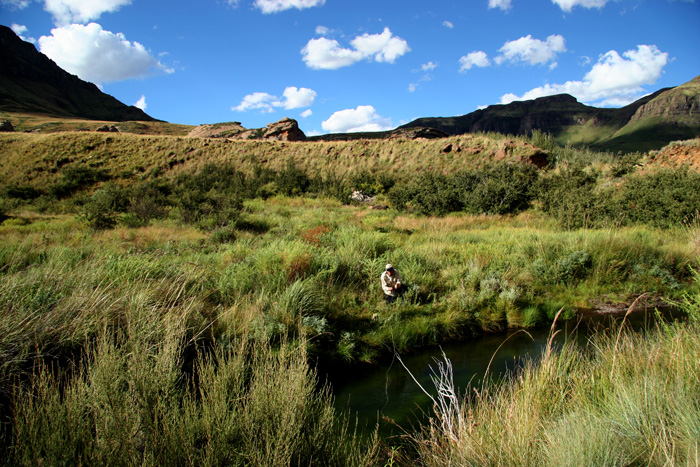 The Willow above the falls – a very special place.

The Willow up here might be testy, difficult fishing, but it’s the kind of fishing you can easily describe as poetic and enchanting and know you aren’t getting too soft or over-sentimental about things. It’s a very special place to many South African fly fishers and providing conditions are right, meaning a decent flow of water, it’s hard to believe you won’t quickly become a convert to the Willow yourself.

Here’s a link to a tapestry of images taken over the years of the Willow Stream, both above and below the falls:

Should you want to visit the farm for a break, contact Margie Frost on 045 9718904, or visit her website at http://www.ballochcottages.co.za